Rolling the rugby league dice: the value of the short kick off

At one end of the scale, we have every NRL team. At the top level, we only see the short kick off when the clock is winding down and the team kicking off desperately needs points to remain in contention for the win. At the other end of the scale, we have the Ipswich Jets, coached by Shane and Ben Walker, who will indiscriminately use short kick-offs, short drop-outs and taking the two when it makes no sense to do so because that’s Walkerology. Are the Walker Brothers on to something that everyone else is missing?

In 2018, I recorded a few outcomes for 1,000 sets of six. This sounds like a lot but it’s actually the equivalent of about twelve games of football. I looked at where the set started, what the end result of the set was (e.g. error, score, fifth tackle kick) and a few other details.

The key insight I arrived at was that, if you don’t care why a set ends, there are only three possible outcomes: the attacking team scores, the attacking team turns the ball over to the defending team or the attacking team gets a new set of six (four outcomes if you count the end of the half). After some analysis, I was able to put an expected points value on a set of six, depending on where the attacking team started the set. Using this, you can analyse strategies to find the optimal solution. In my case, I looked at the value of short drop outs. Today, I want to look at short kick-offs because Joel Caine told me to.

Short Kick Offs are a bigger mathematical no brainer!

The different scenarios for this exercise are as follows:

The obvious scenario four – long kick off with recovery by kicking team – is so rare that we will not consider it but if a team could manage to do that on the regular, then they’d be nigh on unstoppable.

We’re looking at this from the perspective of the kicking team, so good things (kicking team scores points or gets a new set) are considered to be positive expected points (adding to your score as the kicking team) and bad things (turnovers) are considered negative. When the ball is turned over or a new set is started, we assume an average set takes place next, as we can’t accurately forecast teams being in a particular position on the next set using this data.

We assume that the ball travels at least ten but likely no more than fifteen metres and stays in the field of play. That results in the kicking team recovering the ball and starting their set between their opposition 40m and 35m lines. 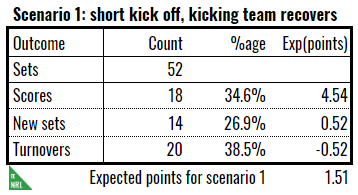 We make the same assumptions as scenario 1 but change who recovers the ball: 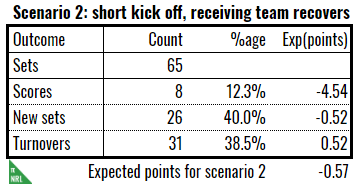 We assume that the receiving team recovers the ball anywhere between their try line and the 25m. 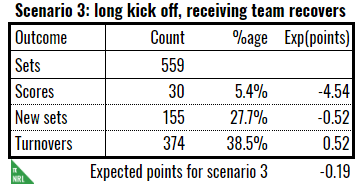 It’s probably pretty obvious that, from the perspective of the kicking team, the order of preference would be:

The expected points back that up. If it didn’t, we’d know there was something wrong. The reality is that a team can’t recover the ball 100% of the time. The question is, is it worth the risk?

No matter what you do as the kicking team, you are giving up -0.2 expected points as a minimum. That means that the short kick off is only -0.4 worse than baseline if not recovered and +1.7 if recovered. That is, every recovered short kick off is worth four times one that isn’t which means, in general, that if you only recover the ball 20% of the time, you should break even.

Teams kick off about five or six times a game and play twenty-four games, so that’s about 130 kick-offs in a year. Even if the kicking team only recovers 30% of the time, each one of those kick-offs is worth on average 0.25 points, that’s 32 points being left on the table. That’s surprisingly close to an entire win’s worth of points. While we shouldn’t put too much weight on these exact numbers, there’s definitely a case to be made that the short kick off might be the single most valuable but unused strategy in rugby league. 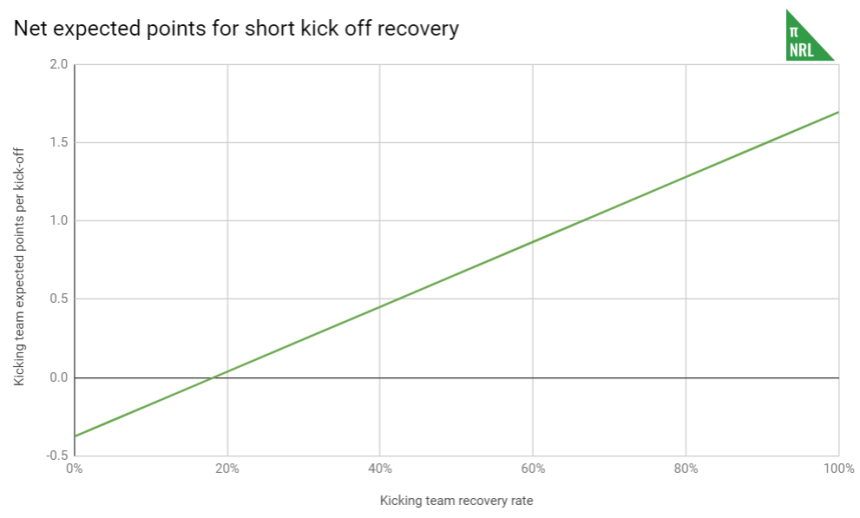 Currently, it appears that you’d be 50-50 to get the ball back, so it’s a no-brainer to do it every single kick off but that’s in the absence of any expectations for the receiving team. What people often don’t consider is the second order effects of tactical decisions. That’s where game theory comes in.

I won’t go into the mathematics of it – mostly because I have zero training in this area – but think of taking a penalty in soccer. You might know that the goalie is weaker on his left side than his right and aim your ball there to maximise your chance of scoring. But if the goalkeeper knows that you know that, then he might adjust his positioning, knowing that it will more likely come to his weak side, thereby reducing your chance of scoring. Thus begins an infinite loop of adjustments and counter-adjustments. The net result ends up being that taking a randomised approach is the optimal solution, over the long run.

It’s also important to distinguish between solutions that provide an edge, on average over the long run, and solutions that will succeed or fail right there and then. For example, it’s optimal to take the two when down by eight when time is a factor but if you actually score a try on that set in lieu of taking a penalty goal, then that’s obviously the better outcome on that day. It might even win you that game but it’s not the optimal decision to take over the long run.

There’s a risk-reward ratio that coaches consider and often it seems they will default to a conservative, low risk approach because it’s easier to explain to the media and football club boards. It might be time to change that.

Form Elo ratings after round 17: