We tend to think of the North Queensland Cowboys as an indisputable top team but in doing this, we forget just how crap they were when they first started out in 1995. The Cowboys joined the ARL as an expansion team at the same time as the Warriors, South Queensland Crushers and Western Reds. Only two of those teams survive today and it was tricky going as the Cowboys established themselves and searched for acceptance in the early days. Eventually, North Queensland built a following in regional Queensland, particularly around their home in Townsville, and their rivalry with the intrastate Brisbane Broncos is one of the most fiercely contested in the NRL.

Since superstar halfback Johnathan Thurston has came to the helm, the Cowboys have strung together a series of finals appearances as good as any team in the league, featuring every year since 2011. Their zenith was reached in 2015 when North Queensland won their first premiership, twenty years after their founding, beating the Broncos in golden point.

The North Queensland Cowboys’ current rating is 1554. North Queensland have had an average class rating of 1464 since 1998. This is below the league average and is only better than Souths and Wests. Over the last decade, their average rating has been 1494, which is seventh best overall behind Brisbane, Canterbury, Manly, Melbourne, St George Illawarra and Sydney City.

The Cowboys peaked at a maximum rating of 1596 after round 9, 2016. This is the ninth best maximum rating in the NRL, putting them ahead of the Raiders, Sharks, Titans, Panthers, Warriors and Tigers. Cronulla are likely to surpass North Queensland this season if the Sharks win two or three more games than they lose.

North Queensland’s lowest ever rating was 1355 after round 18, 2002. This is puts the Cowboys behind all teams in the league bar the Tigers, Souths and current Knights. In the last ten years, the lowest rating achieved was 1402 at the end of the 2010 season when they would have been given the wooden spoon had Melbourne not been stripped of all their competition points.

North Queensland have averaged a form rating of 1530 over the last 26 regular season rounds. Their current rating is 1518. 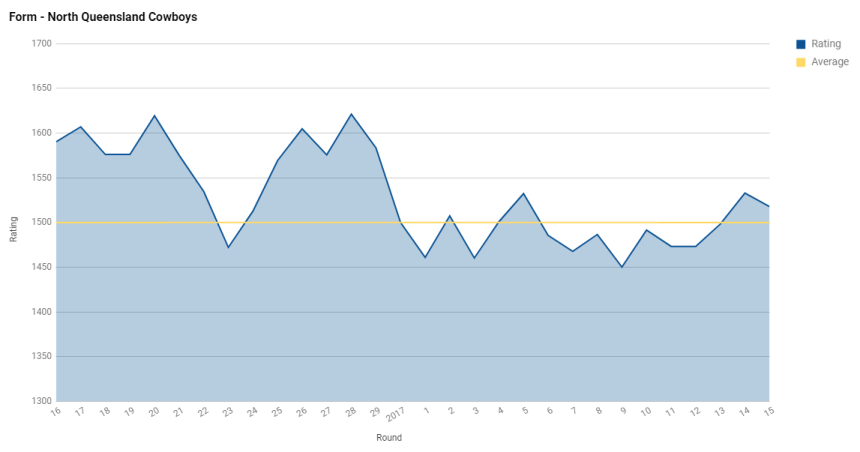 We use the Stocky to predict what might happen in the season ahead. This is what the Stocky has predicted for North Queensland so far in the 2017 season. 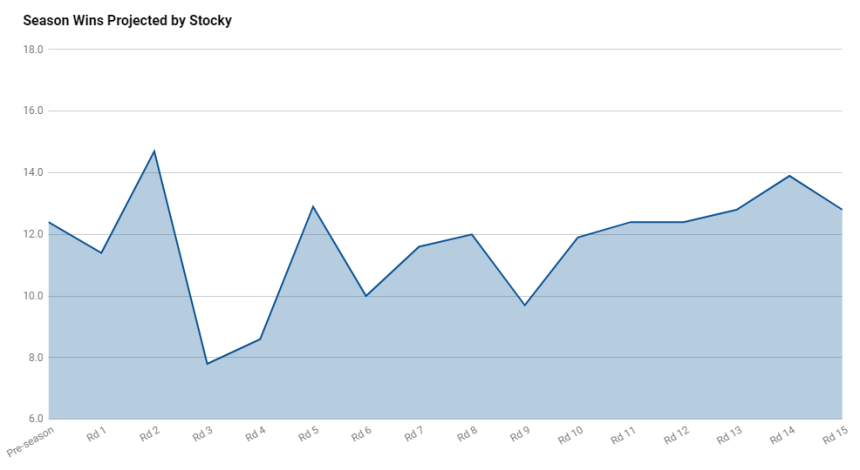