Before Origin ruined everything, I was looking at expansion opportunities using Cap (parts 1, 2, 3, & 4), a metric that measures the ratio of the population of the city over the number of people who turn up to a game. Using a bit of data from AFL and NRL, opportunities in Perth and Brisbane offered themselves with some less likely chances in Adelaide and Central Queensland.

Until now, I’ve ignored the obvious elephant in the room, although the media recently had a field day with it (no links because it was almost all garbage). Sydney has 8.5 clubs: Easts, Souths, Manly, Cronulla, Penrith, Parramatta, Canterbury, Wests and half of St George Illawarra. The long run Cap in Sydney from 1988 to 2011 was 3.5, which is great but given all these clubs regularly lose money, something needs to change. The obvious, but not the only, solution would be to reduce the number of clubs so there’s fewer teams chasing the same pool of dollars.

This seems to be the NRL’s preferred strategy because it requires no action. With nine votes in Sydney and everyone looking out for themselves, unless direction comes from top-down and sacrifices are made, it’s hard to see how any other course will be taken. The problem is that if a few clubs survive of the nine, they might be so weakened by the process that they cannot stay afloat, even in a less congested Sydney market.

But let’s see if we can do better.

This is my preferred option but only because I don’t care about Sydney clubs. Like, at all. If I was given a despotic free rein, all of nine would be bumped down to the Intrust Super Premiership and replaced by two or three brand new franchises. It’d be something like Sydney City, Western Sydney and Outer Sydney, playing out of Allianz, the new Parra stadium and Campbelltown/Penrith respectively.

I can see that this would probably go down poorly with hardcore Sydney fans but with three clubs, the NRL would only need a Cap of 4.6 to get 30,000 average attendances. There would probably be a knock-on benefit in strengthening the second tier competition. So, you know, think about it.

Given no one listens to me, the real question is, if we cannot sustain all nine teams, then do we merge or relocate?

Part of the question would need to be addressed by how big you want the NRL to be and what the break-even points are. This is something I’d like to look at it future.

But for now, we know the AFL has preferred relocation, with South Melbourne moving to Sydney in 1982 and Fitzroy moving to Brisbane in 1997, taking their club’s history with them and making sure that they have a support base at their away games in Melbourne.

The NRL pursued a policy of consolidation by merger in the late 1990s and early 2000s. St George and Illawarra became the St George Illawarra Dragons in 1999, Western Suburbs and Balmain became Wests Tigers in 2000 and North Sydney and Manly became the Northern Eagles in 2001 and then became Manly in 2003 again with Norths disappearing from first grade.

Which worked better? Cap might give us some clues. 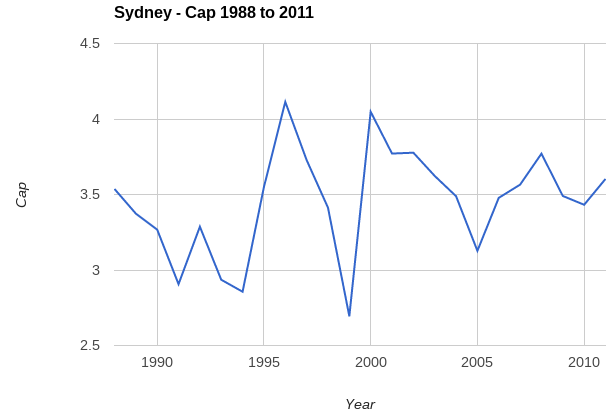 Assuming I have my numbers correct, Sydney’s Cap hits two peaks in recent memory – 1996 before Super League (SL had fewer games than the previous and subsequent ARL seasons) and 2000 after two of the three mergers and the expulsion of the Rabbitohs. 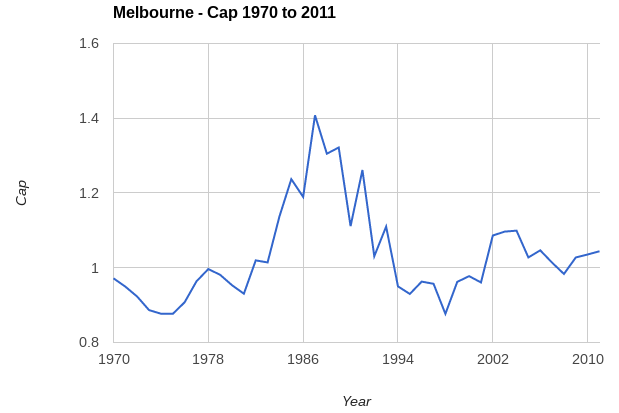 Mergers increased the Sydney Cap by 5%. Relocation increased the Melbourne Cap by 22% in five years in one case and decreased it by 12% in the other.

There’s obviously more factors at play here – disruptions around Super League and the Rabbitohs being in/out/in are two obvious ones – than just the relocations or mergers. If I had all the time in the world, I could linearly regress the data to eliminate every variable but I don’t. The increase post-South Melbourne’s relocation appears to be due to outside factors, considering the NSWRL experienced something similar. My guess is that the fairly tough economic conditions through the 80s is responsible. On that basis, I’m going to conclude that relocations are, if not better than mergers, at least no worse.

Relocation have the benefit that clubs maintain their separate identity. The new host town also gets a team with an established identity and, more importantly, some history, including premierships they can call their own. With some careful scheduling the old fans hang on because they can still see their team play, even if its not technically a home game.

In my book, the candidates would be the Dragons and the Tigers. The Dragons owe a substantial sum to the NRL and the Tigers did up until recently. While the NRL own the Titans and Knights outright, these are markets served by single clubs that need to be retained. Whether you move the indebted half of the club or the entire merged entity would need to be considered. I don’t like the idea of leaving the south coast of NSW without a team but I don’t think they can support one on their own either. Between the St George district and the Illawarra, the Dragons have a catchment of nearly 560,000 people, more than the Raiders can lay claim to.

Others tossed around for relocation are the Roosters and the Sharks, although moving the team named “Sydney Roosters” doesn’t make much sense to me. I do think moving at least one team from Sydney to Perth, if not a second to Adelaide, makes a lot of sense. This argument could take a whole post on its own and I’m not going to presume to make that call on behalf of rugby league, even if I do secretly look forward to seeing the Wests Tigers of Perth and Adelaide-Cronulla Sharks take to the field in 2020.

Postscript – For a slightly different perspective, there’s this piece on the relocation of the Rams from St Louis to Los Angeles. There’s a couple of differences to consider. The first is that the Rams won’t return to St Louis whereas the Sharks/Tigers, to use my example above, would still play roughly a third to a half of their games in Sydney. The second is that while most of the former Rams fans in the article walked away from the NFL, many seemed to stick to football, just not the NFL. In some cases, it was a greater focus on college ball or, as I would like to think, if you relocated the NRL club away from Sydney, the NSW Premiership side would still be around for dedicated fans to back.