StatScore, a player rating tool I developed over the off-season, feels like something powerful but I haven’t had a real chance to use it yet. Thanks to Fox League posting individual player stats, I can at least keep updating the scores through 2018 which I was worried I wouldn’t be able to.

But here we are, about one-fifth of the way into the 2018 campaign, and it’s time to start assessing performances. StatScore gives a lot of props to players in the halves, so much so that three of the four top players from the last four seasons have worn the number 7. During the off-season, a lot of the halves shuffled around, including the top line names of Maloney, Cronk, Pearce, Green, Hunt and Marshall. Let’s have a look at how that’s panned out.

You can read the longer primer but in short, StatScore is an attempt to assign a big, dumb number to a player’s performance. It’s based on eleven individual stats: tries, try assists, line breaks, line break assists, runs, run metres, kicks, kick metres, kick return metres, tackles and tackle busts. Each stat is weighted by its contribution and correlation to winning at a club level. The sum of the weighted stats is called production.

Standard disclaimer: these stats are based on rounds one through five, so is a much smaller sample size than we work with when we’re at the end of the year. The round to round changes have been significant. Gareth Widdop’s StatScore, for example, on a round-by-round basis:

So we turn our attention to which team has the best halves pairing (or trio, depending on how injuries have affected your club’s line up). 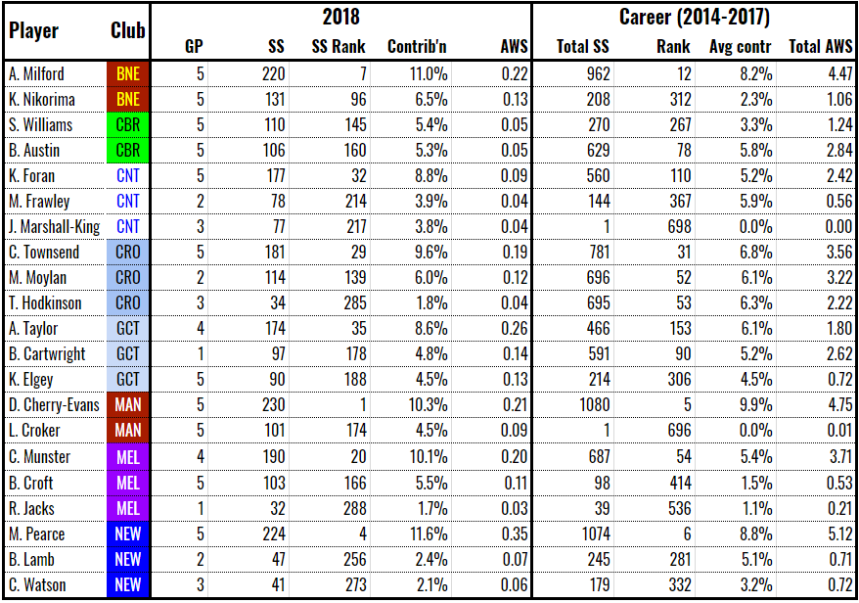 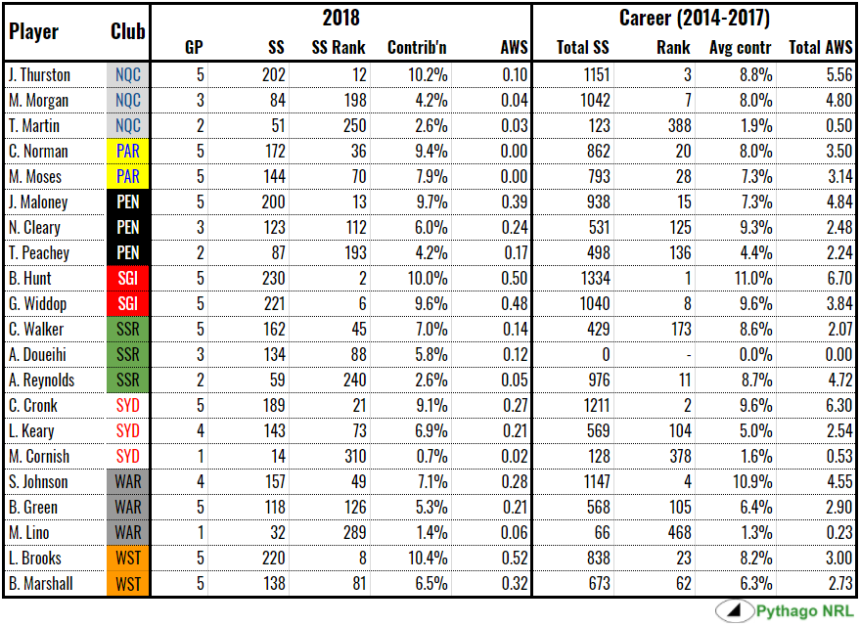 Where three players have been used in the halves over the first five games, their contributions have been weighted by the number of games they have started in the six or seven jersey. 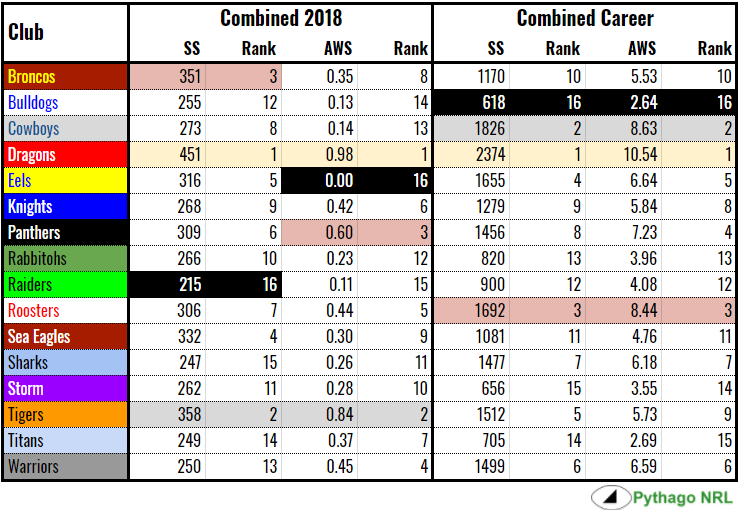 If you check the career columns, a lot of the combinations tend to rank the same on StatScore as AWS. This leads me to believe that any divergence in the two over the short term corrects over the long term. We don’t yet know how long a divergence can be sustained or which direction the re-convergence will come (does StatScore improve to meet AWS or vice versa?) but for now, some teams are underperforming and outperforming their StatScore.

Other combinations are working just fine – racking up stats and wins – or not at all. Here’s how they break down.

The Titans duo of Kane Elgey and Ash Taylor are the second least experienced pairing in the league (combined career SS 705 / career AWS 2.69) and are ranked fourteenth on this season’s performance alone (249). And yet, they have the seventh highest season AWS of 0.37. It’s not great and a huge portion of those wins have come from elsewhere (e.g. Jai Arrow) but it’s massively above what was expected.

Despite having a breakout performance from Blake Green (at the tender age of 31) and brand name halfback Shaun Johnson, the Warriors’ halves only rank thirteenth on StatScore so far this year. An electrifying 5-0 start (now 5-1) has seen them gain 0.45 AWS, placing them fourth best in the league. Whether the discrepancy is down to a style of play or Johnson is going to start racking up metres and assists remains to be seen.

I suggested pre-season that the halves pair of James Maloney and Nathan Cleary would be really good, tempering experience with talent. I was right. Despite Cleary missing a couple of games, the combination sits on a very good 309 (6th) and has racked up the third best AWS. This is in line with the combination’s career performance, where StatScore lags slightly behind a total AWS of 7.23, fourth best in the league.

If you thought this analysis was going to end with the Dragons’ duo being anything other than the best, you were hilariously mistaken. Ben Hunt was the StatScore Top Player in 2014 and is the overall career StatScore leader. Gareth Widdop has never been outside the top twenty over the same period. Put them together and it’s fireworks. The numbers and on-field results absolutely back this up.

I would’ve laughed you out of the room if you’d said that Wests had the second best halves pairing – that is, Luke Brooks and an aging Benji Marshall – early in 2018. And yet, here we are. Wests aren’t the best team in the comp but they’re pretty good and playing with a big helping of heart. A lot of this is owed to the leadership of Brooks and Marshall. They’re admittedly 100 points off the Dragon’s pace but still better than anyone else. Their stats are match by their effectiveness, claiming 0.84 AWS.

I was prepared to write that Daly Cherry-Evans is a ball hog, sitting atop the StatScore leaderboard after five rounds. With that number of stats, how can his partner put up any numbers? Well, Lachlan Croker has a respectable enough 101 – basically bang on average – to contribute to Cherry-Evans’ 230, which puts Manly fourth in the comp on StatScore. This hasn’t translated to consistently good performances, particularly away from Brookvale, and the combo sit ninth on 0.30 AWS. They are doing much better than their career combo rank of eleventh would suggest, so on the balance it’s working OK for the Sea Eagles.

Much has been made of Brodie Croft’s performance – or lack thereof. Nonetheless, the Melbourne combo ranks eleventh on 262 and tenth on 0.28 win shares. A lot of teams would call that a reasonably successful opening phase of the season. For the Storm, who lost one of this generation’s major talents in the off-season, this is an unacceptably slow start. The reality is that they’re somewhere in the middle, neither good nor truly bad. With Ryley Jacks taking Croft’s place for the foreseeable future, this may or may not improve.

Mitchell Pearce’s arrival at the Knights has signalled a return to, if not the top half of the ladder, then at least somewhere in the pack just outside the top eight. So far, so good with Pearce and Connor Watson or Brock Lamb pulling in a ninth best 268, of which Pearce is responsible for almost all of it. Their AWS of 0.42, putting the Knights sixth on something, is evidence of a greatly improved prospects for Newcastle in 2018.

Funny how Cooper Cronk and Mitchell Pearce link the the last three clubs together, with their transfer shenanigans over the summer break. None of the clubs have really excelled in the halves. Whether this is due to a lack of time in the fridge to set or the combos are not working remains to be seen but the Roosters combo of Cronk and Luke Keary have brought in 306 StatScore (7th) and 0.44 AWS (5th). This is a little below what we were expecting from Sydney and only 40 points clear of Melbourne and Newcastle. The Chooks are going better than the Knights or Storm but we were expecting them to be really good, not just a bit above average.

Other than the Dragons, no team’s halves pairing is as close in performance as Sam Williams and Blake Austin are. So that’s something. What’s not great is that neither of them have put in much above average performances, scoring 110 and 106 respectively, leaving the Raiders dead last on StatScore. Their AWS, after an awful 0-4 start to the season, is not much better on 0.11 and fifteenth. Another win on the weekend, not included here, will help but it’s been a very poor start to the season for the Raiders duo.

The Bulldogs are looking pretty good for a spoon right now. The Oonspays’ halves rank dead last on career stats, behind the pups at the Titans and the Storm. Their performance so far this year, only good enough for twelfth on StatScore and fourteenth on AWS, does not inspire much confidence in the future. Dean Pay can add this to his monumental list of things to fix at Belmore.

The Sharks’ combo has a fairly pathetic StatScore of 247. Chad Townsend on his own is responsible for 181 of that. He needs a partner to help in the playmaking. Someone like James Maloney but one that wasn’t shipped off to Penrith in exchange for the only myth bigger than the Iliad. Trent Hodkinson isn’t helping either with a StatScore of just 34 achieved across three games while Matt “Odysseus” Moylan tries his luck in the backline. The halves combo is lucky to have an AWS of 0.26. It could be a lot worse.

To be fair to Souths, they are right on the cusp between average and bad. Despite their combined StatScore ranking tenth in the league, the Rabbitohs trio is only 50 points clear of the Raiders but nearly 200 behind the Dragons. AWS of 0.23 puts them in twelfth in the league for effectiveness, about the same level as their experience.

The Broncos’ halves problems are well documented and there’s no need to go into it again here. However, they’ve got the third highest StatScore in the league but as anyone who has watched Milford and Nikorima play this season, their effectiveness leaves a lot to be desired. Milf/Niko have picked up only 0.35 AWS, ranking them eighth.

Cover your ears Cowboys fans but… Johnathan Thurston is old and almost busted. The heir apparent, Michael Morgan, has had his own injury struggles this season meaning Te Maire Martin has had to fill in again. That combination has only managed a StatScore of 273 (8th) for a total win shares of 0.14 (13th). This is despite having the second best halves combination on experience.

Norman and Moses have racked up enough stats for their combined StatScore to put them fifth in the league. They have a combined win share of zero because the Eels haven’t won a game yet and as of round 6, we’re still waiting. Lacklustre attacking options is somewhere on the list of the Eels’ problems but it isn’t as close to the top as fitness, a lack of motivation and a useless forward pack.

Because of the fluctuations from round-to-round, I really only plan to update this every four to six weeks but here’s the current leaders after round 5: 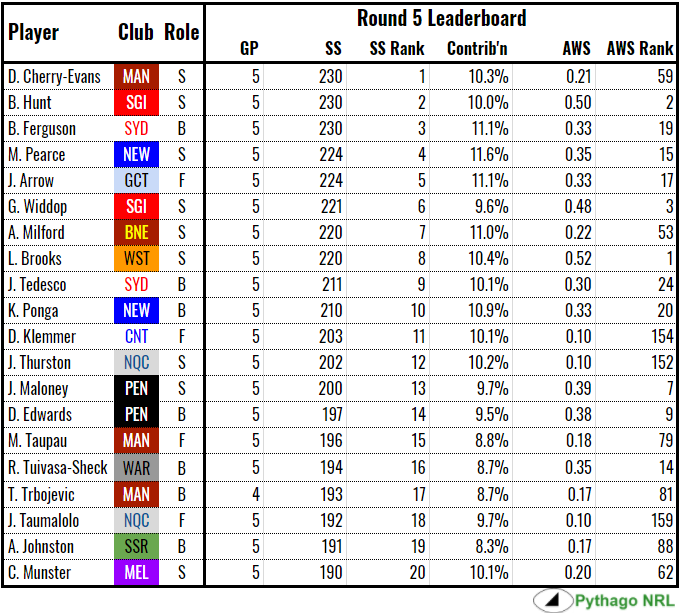 At the end of the year, there will be a completely unnecessary StatScore-based awards post, including unveiling a team of the year. Stay tuned.