The Auckland Warriors, as they were originally known, were introduced to the competition in 1996, the first expansion team from outside of Australia.

In the heady days of Stacey Jones’ leadership, the team became contenders, winning a minor premiership in 2002 and only falling at the last hurdle in the grand final to the Sydney Roosters. The team would be deep into the finals again in 2003 before being eliminated in the preliminary final by eventual premiers Penrith.

The Warriors went through a period of re-building after Jones left the club in 2005, culminating in another grand final appearance in 2011 under coach Ivan Cleary. While NZ would ultimately lose out to Manly, the Warriors have since maintained a level of adequacy that is neither inspiring nor depressing. The team is struggling to make an impact this year and has faced an unfair call to be dropped from the competition despite never having copped a wooden spoon.

The New Zealand Warriors’ current rating is 1442. New Zealand have had an average class rating of 1481 since 1998. This is below the league average but is still better than Canberra, Gold Coast, North Queensland, Penrith, Souths and Wests. Over the last decade, their average rating has been 1485, in line with their long-term performance and is better than Canberra, Cronulla, Gold Coast, Newcastle, Parramatta, Penrith and Souths. If the Warriors continue to outperform the Tigers, they will surpass their ten year average this season and move into the top half of the competition.

The Warriors peaked at a maximum rating of 1565 after the 2003 semi-final. Only three teams have a lower maximum rating: the Tigers, the Titans and the Raiders.

New Zealand’s lowest ever rating was 1399 at the start of the 2001 season when I deducted some rating points for the name change from “Auckland Warriors” to “New Zealand Warriors”. This is puts the Warriors squarely in the middle of the competition on this metric.

New Zealand have averaged a form rating of 1472 over the last 26 games. Their current rating is 1443. 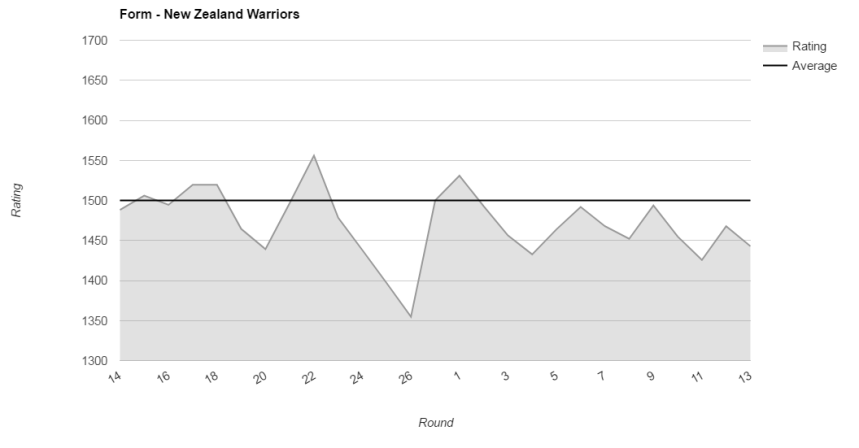 We use the Stocky to predict what might happen in the season ahead. This is what the Stocky has predicted for New Zealand so far in the 2017 season. 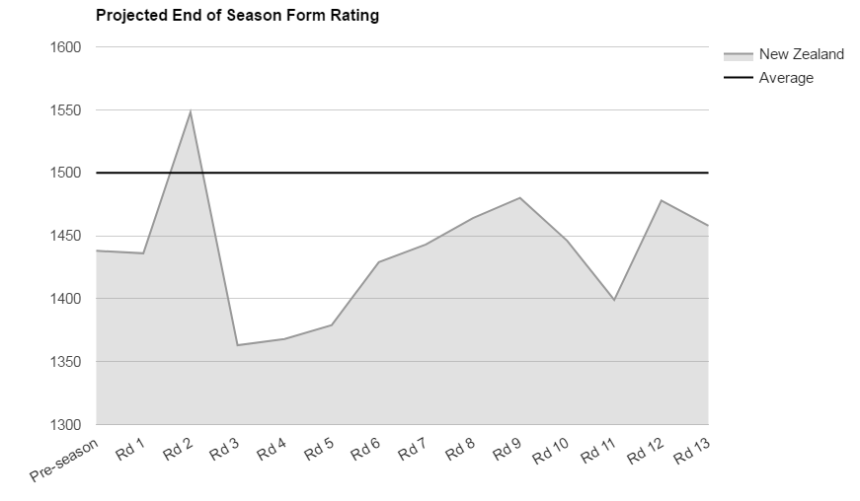 Form Elo ratings after round 12: