A good round for home teams with only the last fixture turning up a win for the visitors. I think the biggest surprise was the Panthers’ win over the Bulldogs. You might’ve tipped them but did you also pick the 38 point margin? I think not. I also missed the Roosters getting one over the Broncos, a very disappointing result for me and while I’m loathe to blame one player, Kahu is not exactly my favourite at the moment.

In other news, the Warriors, Knights and Tigers suck. The Titans, after a stellar April/May, have returned to what I guess everyone expected pre-season. They all have a lot of work to do to make the finals next year, let alone salvage anything from this season. Manly and Canberra went to golden point for the second time this season with the Sea Eagles coming out on top again.

Melbourne remain atop the Collated Ladder. The 17 wins is starting to look a lot like underestimation but it’s been a tough season to call and extrapolating the second half from the first half is a stretch. There remain four teams on 15 wins, with the Broncos supplanted by the Sea Eagles. Brisbane have fallen from second place a couple of rounds ago to sixth now. Pretty typical for the Origin period. Cronulla, St George Illawarra and Sydney still make up the rest of the top four.

Penrith’s surprising magnitude of win has seen them displace the Cowboys from the top eight. Canberra are still hanging in on Pythagoras alone but the Stocky doesn’t rate them. Parramatta, Gold Coast and NZ are all sitting on eleven wins which would normally be enough for to get into the finals but due to the compressed field this year, they sit in tenth to twelfth.

Newcastle’s five wins are looking optimistic. As are the Tigers’ seven wins and the Rabbitohs’ eight wins. Presumably those that they miss will be donated upwards to other teams.

Manly’s recent, and I think temporary, improvement in form has bumped them up to the fourth position in the line of minor premiership, ahead of SGI and Brisbane. I think we’ll see that swing around again by the end of the Origin period but if not, they’ll have to be added to the minor premier contenders graph. Penrith’s recent performance has gotten them over North Queensland and into the finals which is, at best, a quirk of the system if not outright insanity based on what we’ve seen. The Stocky also doesn’t know that JT’s return is imminent.

Currently, the Roosters, Sharks and Storm are no chance of finishing last. The Knights remain well advanced in their wooden spoon campaign but a lack of wins for the Rabbitohs and Tigers leave them in the picture. If Canterbury’s flogging at the hands of Penrith is indicative of the rest of their season, they might be in the running too. 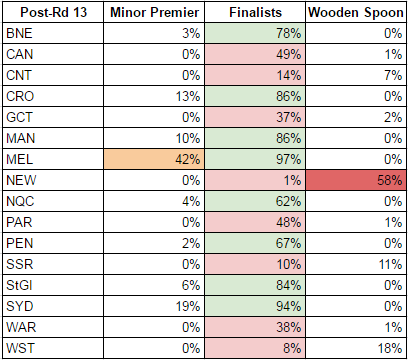 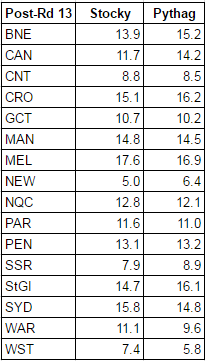