The Greeks is the collective name given to a series of Elo rating models for tracking performance of rugby league teams and forecasting the outcomes of games. I usually refer to them as if the philosopher himself was making the prediction, even though the Greeks have mostly been dead for a couple thousand years and certainly would never have heard of rugby league or Arpad Elo.

The differences between each Greek are on the subtle side, with the intention of measuring different things. You may want to revisit primers from last year:

END_OF_DOCUMENT_TOKEN_TO_BE_REPLACED 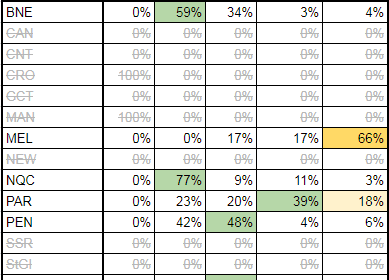 This is the last projections update for the year. It’s come around so fast.

While I realise there’s still three weeks of finals left, in reality there’s three games left after next weekend. The Stocky is not great at dealing with small sample sizes of games, as evidenced by its relative lack of performance towards the year’s end, so its a little pointless doing it any further this year. I might tweet something instead. Let’s also ignore the fact that the Storm are unbackable favourites at the moment.

The projections will be back next year, rebranded and tarted up, and the tips posts will continue until I sign off sometime after grand final day.

END_OF_DOCUMENT_TOKEN_TO_BE_REPLACED

Posted on September 5, 2017 by pythagonrl

Normally, we’d run through the Collated Ladder but this week, being the end of the regular season and the real ladder is far more accurate (being complete and all), I thought I’d compare the different systems to see how their rankings stack up:

END_OF_DOCUMENT_TOKEN_TO_BE_REPLACED

The Collated Ladder is a bit useless now and I’m mostly just publishing it for completeness. For example, it strangely has both Brisbane and North Queensland losing their final round face-off, which is a relic of the way the ladder comes together. Look at the Stocky column for a better bet:

END_OF_DOCUMENT_TOKEN_TO_BE_REPLACED

Unsurprisingly, the Collated Ladder is starting to closely resemble the actual ladder. The top six are pretty well safe now and I’d be surprised if their positions change much between now and the end of the season.

Due to some shenanigans in the Stocky (which I elaborate on below), positions 7 through 10 have changed rather significantly from last week, particularly if you’re from North Queensland or the northern beaches of Sydney. Points difference is going to be extremely important to secure the last two finals spots. Here’s what the draw has for the teams in the firing line:

Given the topsy-turvy form on display in recent weeks (e.g. Tigers, Bulldogs, Knights winning), there’s not what you would call any gimmes in that lot, especially given all four contenders are struggling for form. Undoubtedly, something resembling luck will come into it.

END_OF_DOCUMENT_TOKEN_TO_BE_REPLACED

Melbourne are currently sitting on sixteen wins and are projected to take eighteen. With three games to go and playing very well, that might be more like nineteen by the end of the regular season. Brisbane and Sydney City close out the top three spots, just as they do now. Both sides are going to stay at least four points off the pace.

The remaining spots are interesting. Penrith in the top four? They’re currently only two points off Cronulla, who are not playing well. Three wins for the Panthers and two for the Sharks would not be a surprising outcome. The Collated Ladder also has the Cowboys not far off the pace and there’s not much to separate them – Stocky wins and Pythag are very close for all three. Fourth place is very important as almost all of the premiership winners of the last twenty years have finished in the top four.

END_OF_DOCUMENT_TOKEN_TO_BE_REPLACED

I’m running a bit short on time this week, so I’ll dispense with the usual round up of matches and dive straight into it.

Actually, I’ll take one moment to say that I watched five of the eight games on the weekend (missed the Saturday fixtures) and the Souths-Saints game was the best of the lot. It might be because my expectations were so low but that was a hell of a finish from the Bunnies.