Posted on September 5, 2017 by pythagonrl

Normally, we’d run through the Collated Ladder but this week, being the end of the regular season and the real ladder is far more accurate (being complete and all), I thought I’d compare the different systems to see how their rankings stack up: 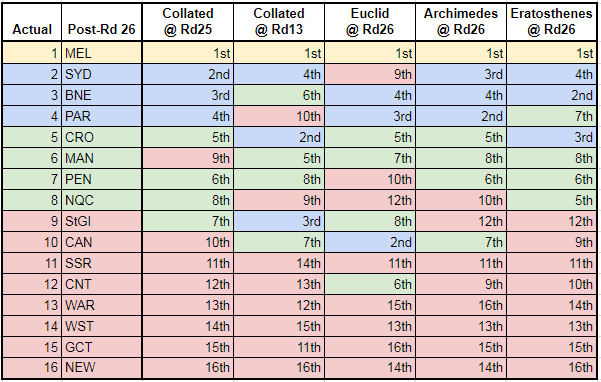 There’s not a bad level of agreement there, although Euclid has probably overreacted to the Raiders’ and Bulldogs’ most recent results. Obviously the Dragons’ and Panthers’ losses put a bit of a spanner in the works on the most recent edition of the Collated Ladder. The Collated Ladder positions post-rd 13 highlights just how far the Eels have come and how far from grace the Dragons fell. Newcastle fans can find some comfort in metrics which don’t place them at the bottom of the ladder but the Warriors should consider themselves lucky to have finished thirteenth.

The (normal) Stocky can give us the probability of specific season outcomes so you can see how your team is tracking to win the minor premiership, make the finals or avoid the wooden spoon.

The below table shows the likelihood of each team being eliminated in a given round of the finals based on a modified, finals-specific Stocky. Teams with a line through them have already been eliminated.

Going back through, the 2017 Storm have the second highest ever end of season rating, behind the 2002 Roosters who finished on 1769. The current Storm are better than the 2001 Eels and the 2004 Bulldogs. Even then, the ’02 City side was 130 points ahead of the competition, not nearly 200. There’s no real comparable level of choke available for comparison if the Storm don’t win this. Here’s the closest analogs:

As a result, the odds of Melbourne winning the premiership are now around the $1.40 mark and that’s with three games still to win. You would’ve gotten similar odds for the Titans winning on Saturday as any of the other seven teams coming through to take the trophy.

The best hope of an upset lies with the Broncos and the Eels. Both will be hoping that they meet in the opposite preliminary final to Melbourne and that somehow, the Storm fail to win that game. There’s only about a 13% chance of the Storm not making the grand final but I think that’s the only way a premiership is going anywhere other than Victoria. The Sharks (due to a flattering rating and an unfavourable draw) and Roosters (due to a favourable draw and unflattering rating) are in the next tier with the Sea Eagles, Cowboys and Panthers almost non-existent.

I’ll have a more in-depth post later in the week (written with normies in mind) but for now:

Side note: Parramatta’s and Brisbane’s ratings are quite close at the moment but the win for Brisbane versus the loss-then-win for Parra moves the Broncos’ ratings up more and so makes them favourites for the preliminary final. We don’t consider home ground advantage in this analysis.