Nathan Cleary confirmed his future superstar status by carrying the Penrith Panthers on his back, leading them to a win over the Warriors to open round 19. His elephantine performance had Penrith in control for the last sixty minutes of the game leading to only the Warriors’ second loss at Mt Smart Stadium this year. Canberra got home in golden point over St George Illawarra in a game that it looked like no one wanted to actually win. After an exchange of wayward field goal attempts, the game wrapped up 14-all at full time. The Raiders pushed on with a 40/20 from Aidan Sezer giving them the field position to set up the golden try.

The Broncos were at risk of a post-Origin loss to the Knights. It seemed like it might head that way when Newcastle led 12-6 at half time. A fired-up Broncos returned to the field and put the sword to the Knights, coming home comfortable winners. On the Gold Coast, torrential rain led to some questioning whether the game should continue. It did because they are professional football players and taking bodily risks is part of the job description. In what I would have described as the biggest upset of the season if it hadn’t already happened in round 8, the Titans dominated the Sharks, not even giving them the opportunity to claw their way back in.

Manly made their win over Wests a lot harder than expected in front of a packed Brookvale Oval. Despite the Sea Eagles scoring two tries in the first ten minutes, the Tigers managed to go into half time in front. Manly kicked it up a gear in the second half and ran in three unanswered tries to pick up the two points. The Rabbitohs took the final game of the round to Cairns and were promptly battered into submission by a rampant Cowboys side. North Queensland barely had to get into gear before building a solid lead that Souths were never able to threaten. The conclusive win for the Cowboys was not enough to lift them further up the ladder.

The top four has shuffled around a bit. The Storm still lead the way obviously but the remainder of the top four now consists of the Sea Eagles, Cowboys and Roosters. After their loss to the Titans, the Sharks have been displaced and the Stocky has re-rated the Roosters’ chances against them, bumping Easts up the Collated Ladder.

The Dragons have exited the top eight for the first time since round 2. I had them pegged as the leaders in rounds 6 and 7 and now they’re not even looking like playing finals football. They’ll have company, with the Titans’ win still not enough – they’ll need like five more of those – and the Warriors’ loss enough to seal their respective fates. Instead Parramatta and Penrith look good bets to make the top eight, having played themselves into form.

Melbourne are still odds-on favourite for the minor premiership, although North Queensland’s recent streak of success has seen them improve their ratings substantially recently at the expense of the Storm. Not having JT is not such a handicap after all. Cronulla are just about cooked and if it stays this way after the next round, the Sharks will swapped out for the Cowboys on the minor premiers graph. Manly and Sydney remain dark horses.

The top eight is pretty well locked in with Cronulla being the least likely to make it at 72%, if each team continues on their current form. Gold Coast are over 50% but still not that likely to make it and only have that high a percentage thanks to quirks in the Stocky calculations that I won’t go into here. 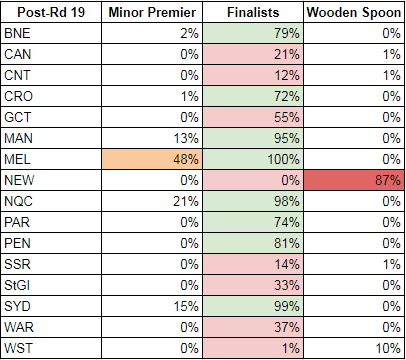 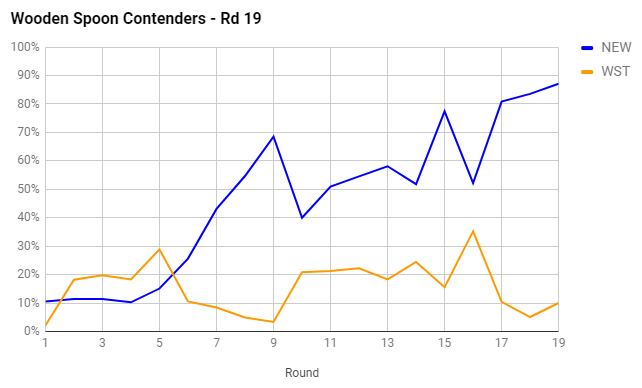 We’re getting closer to the end of the season and the clubs are shaping into two camps of who will and who will not be there in September. The Stocky has been modified to run it’s magic on the finals series for two scenarios:

The below table shows the likelihood of each team reaching a given round of the finals based on these scenarios. Teams with a line through them have a slim-to-no chance in either scenario of finishing in the top eight, let alone featuring as more than elimination final speedbumps.

The Cowboys are currently at $15 to win the grand final but I have them around $3-$4. It’s a severe over-rating coming on the heels of six wins from seven games (only loss against Melbourne in Golden Point) but if you’re inclined to have a punt, maybe have a think. 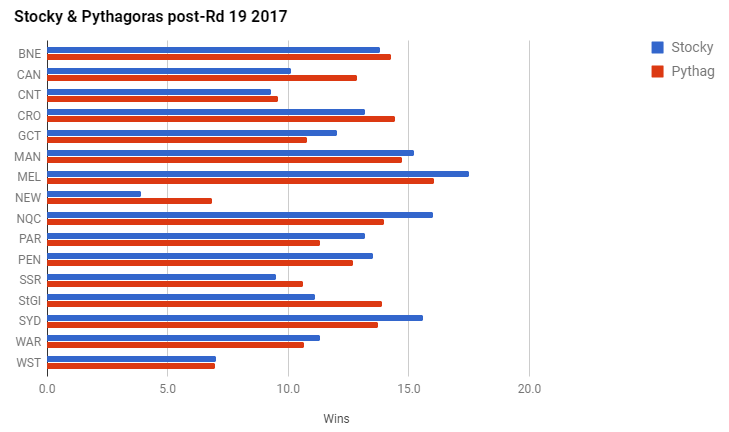