We’re finally off and racing in 2018. Every NRL fan has finally seen their team take the field in anger for the first time. For most, it wasn’t a pretty sight with a lot of polish still to be put on their respective games. That said, there were flashes of what is to come from the contenders and it remains to be seen who was lucky and who will be in the running come September.

It’s obviously too early in the year to be getting too wrapped up in what the indices (Indices? See the primer) have to say but publishing them is illustrative to how they work and, to be fair, the index leaders aren’t too far off how I’d rate them if I was doing it qualitatively.

Storm leading the Power Index is about as common as the sun rising. The Stocky already has the Storm pegged as 27% chance of winning the minor premiership off the back of being rated about 70 points better than their nearest rival. They’ve been prematurely crowned prospective premiers but I’m sure other teams will overhaul them during the season.

Everyone else is pretty closely rated, but it will take a few more rounds for the stragglers – the likes of the Knights, Titans and Warriors –  to repair their ratings if it turns out that their round 1 form is not a fluke and for others – the likes of the Cowboys and Roosters – to break clear of the pack. 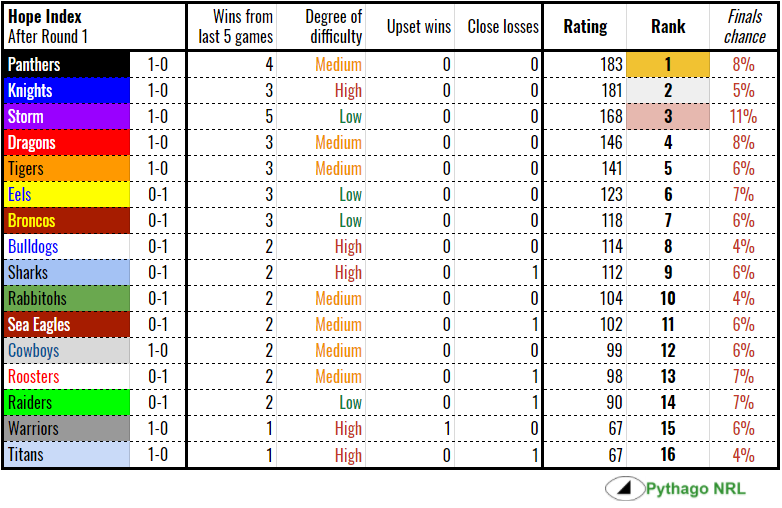 This is probably not too far off the mark. It’s too early for Raiders, Warriors and Titans fans to get properly excited, especially with such a lack lustre finish last year. The Tigers are well up there after a solid finish in garbage time 2017 combined with a surprise win over the Roosters. Panthers and Knights are showing some encouraging signs that things will be better but there’s obviously still twenty-four rounds left to play.

Look, if it was up to me, I’d have the Broncos up the top but that’s not how this works. Everyone has a negative panic rating, meaning no one should be panicking just yet but certainly some teams, namely the weekend’s losers, should be more concerned than the winners.

The Bunnies and Doggies are breakout favourites for the wooden spoon but that may rectify over the next six or so weeks, depending on how they play.

At the moment, this is a reflection of the fact that every team either has a 100% record or a 0% record. There’s a massive gap between the 8th placed Storm, with 465, and the 9th placed Bulldogs, with -599. Normally, we would expect most teams to gravitate around zero and they will get there as the error on both Pythag and the Stocky improves.

This is obviously wrong. How can you have the second largest winning margin of the round and still be the most disappointing team? Well, if you look at the first column, that might give you a clue. In short, we expect very good teams (as the Storm, Broncos, Sharks and Roosters have been over the last few years) to win lots of games this year. So far they have, at best, one win and some none, so there’s a significant gap between how many we expect them to win and how they could have won.

A flaw in the design? Perhaps but it will take the best part of the season for this to come together. In the interim, its still fun to refer to the Storm as being disappointing because they’ve only won one game. Teams like the Knights might be able to meet their quota early in the year and go negative, securing them a low finish on the Disappointment Index. Whereas the other indices will move around enough to give you whiplash, keep an eye on this one because it will evolve slowly.

The Dolphins, Blackhawks, Bears and Magpies emerge as the top-rated teams at the moment, particularly with Townsville stamping their authority all over Mackay and Burleigh cruising to a win over a defensively poor Sunshine Coast. Capras are still out the back but a lot closer after the biggest surprise of the weekend, edging the Tigers by a single point.