Round 7 opened with a dour, and that’s being kind, affair between the Roosters and the Bulldogs, resulting in a single try to Easts which was enough to win the game. The Warriors were the better team on the day of their top of the table clash with the Dragons. Melbourne were able to run riot against Brisbane, who struggled with defence on both wings. Souths won a high scoring affair against Canberra while Newcastle were able to just edge out Wests in a see-sawing battle in Tamworth. The Cowboys are trying to get their season back on track with just their second win over the Titans. The Eels smashed the Sea Eagles beyond recognition for a 88 point swing on their previous rendezvous in round 2. Finally, Cronulla won a tough battle with Penrith in the Shire on Sunday afternoon.

The Dragons are on top of the Power Index, just where they were last year right before their season fell off a cliff, eventually ending in ninth place. Their first loss of the season, inflicted at the hands of the Warriors, has seen their projected wins fall from 18 to “just” 17. There’s a solid pack of chasers in Melbourne, New Zealand and Penrith with sixteen wins right behind. The minor premiership is still wide open between these contenders, each roughly about $5 or $6 chance and Sportsbet (at time of writing) currently has some of them well above this. Wests at $21 and Souths at $15 could be worth consideration as the Tigers fall back a little from the leaders this week after just their second loss and the Rabbitohs start to close in.

Did you notice that Souths had won four of their last five games? I didn’t and after a sluggish start to the season, they are now climbing the ladder and improving their rating. The Bunnies sit in the top eight and if they keep playing this way, we fully expect them to stay there. The finals teams are looking fairly settled, although order is very important obviously and nowhere near settled, with the Roosters and Sharks perhaps being outsiders. There’s a non-zero chance that one of these teams won’t make it in the end with the Knights and Broncos relatively well positioned to step up if required.

Parramatta are very lucky. Imagine losing to a team you beat only a handful of weeks ago by fifty-four points. Manly are that team and between that and the Hastings/Cherry-Evans cat fight (not that that affects this index), the Sea Eagles are leading the Panic Index. Somehow, despite a woeful 1-6 start to the season, the Eels have managed to avoid taking top spot this week. Top spot. On the Panic Index. They missed out by two whole rating points, which is basically the difference between one and two big losses. This seems to be about the only luck Parramatta can count on this season but maybe things will get better from here. 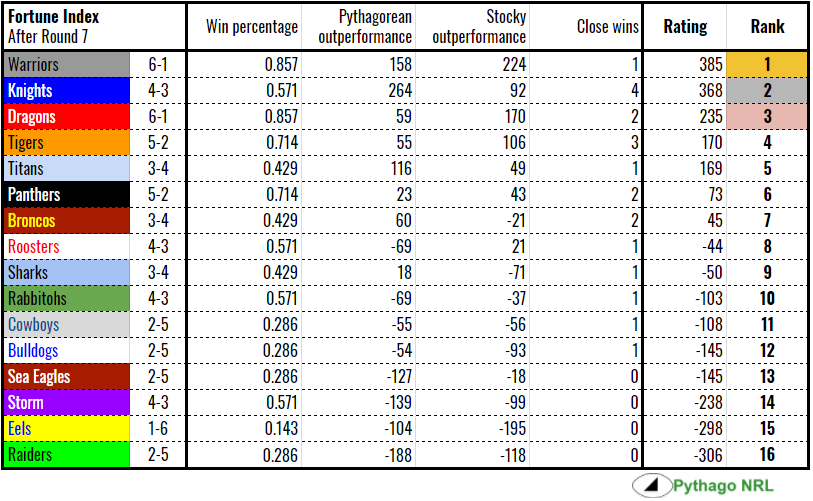 If you’re a fan of the Panthers, Broncos, Roosters or Sharks, get used to your current position on the ladder. All four teams are performing roughly in line with expectations, both on the Pythag and Stocky front. That’s good news for Penrith up in third, less so for Brisbane down in tenth. The Warriors and Knights are roughly .150 above where we expected them to be (so 4-3 for the Warriors and 3-4 for the Knights), so they are either fluking wins or playing above their station. The Raiders and Eels are well below what we expected, the Eels due to a general and consistent lack of performance and the Raiders due to that frustrating series of close losses at the start of the year.

The big teams continue to struggle to build momentum this season. The Storm will need to win two more games than the Cowboys or Broncos to get off the top of the Disappointment Index. That seems likely but it’s less likely that will happen in the next couple of weeks. The Sharks are not far off the pace either and have slipped a little down thanks to a win over the Panthers. The Knights, at the bottom, are only three wins off what we expected. They have seventeen rounds left to accomplish this seemingly easy task. Newcastle might just get there and exceed expectations this year.

As wild as the NRL gets, the ISC is always going to be wider. The second column is what we expected the likelihood of each outcome. There were three seemingly dead certs (>60%): Bears beating the Seagulls in a gutsy come-from-behind victory at Wynnum, the Dolphins downing the Cutters and the Blackhawks getting the jump on former ladder leaders the Devils. The were three unlikely wins (<40%): Tweed convincingly got home over Easts, Central Queensland beat Northern Pride and Ipswich slotted a late field goal to beat the Sunny Coast. There was only one coin toss with the Magpies beating the Hunters in Port Moresby, which has only happened seven times from the Hunters’ entry in 2014 to the end of 2017.