A shortened round 13 began on Thursday and reminded me what life was like outside the NRL bubble. The Cowboys looked a little like their old selves on their way to beating the Sea Eagles. Souths, despite losing their top four players to Origin prep, managed to keep a lack lustre Cronulla side at bay and take an important win. Newcastle thrashed Parramatta and put the final nail in the coffin of the Eels’ season. The weekend was capped off with an exciting but extremely chaotic bout between the Roosters and Tigers, with some desperate defence in the dying minutes sealing the win for Sydney.

Given it’s a half round, this recap will be, as they say, an “express” post. 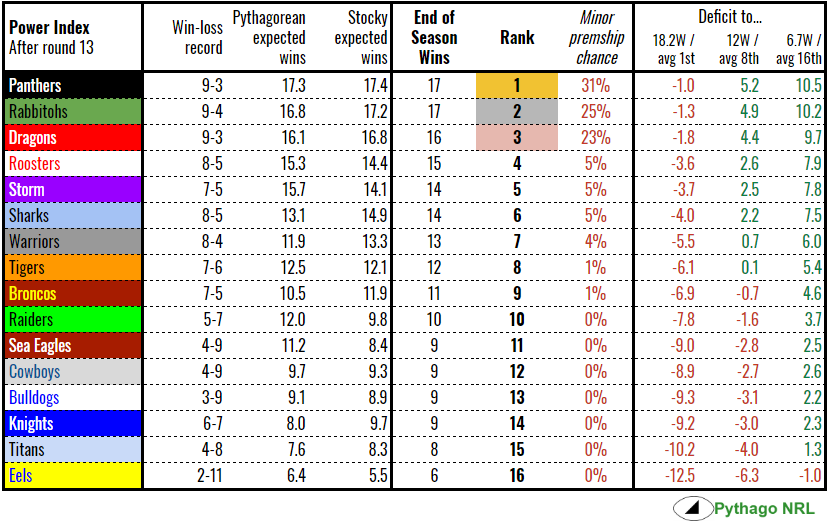 Souths have clearly inserted themselves into the title race. We have projected them to pick up another eight wins on their way to challenging for the minor premiership where they have a one-in-four chance of taking it out based on their current form. The Panthers and the Dragons are in the same ball park and there’s daylight to fourth.

Whether the Roosters and Storm can close that gap or if any of the top three will fall away (as the Dragons were in the process of beginning before their bye) remains on the season’s more interesting unanswered questions. 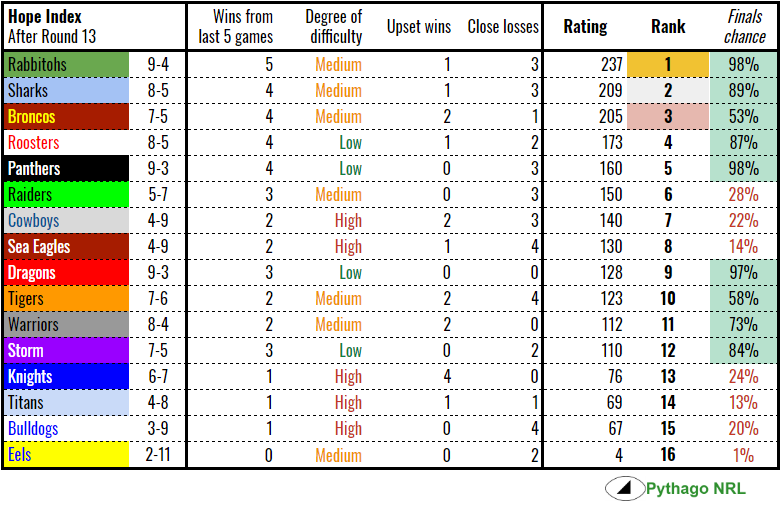 The Bunnies are the NRL’s new hottest thing, which is reflected in their top billing on this week’s Hope Index. They’ve won their last five games and had a similar run before that, so are looking the goods. Time for Redfern to get excited. That said, there are a lot of teams with four from their last five and just as many with one or none from their last five. Seems to be a real divergence in the quality of teams this year that didn’t seem to be as evident last year where the Storm dominated and the rest chased.

It would seem based on projections that Souths, Cronulla, Sydney, Penrith, St George Illawarra and Melbourne are locks on their finals places. The Warriors aren’t far off and will probably make it as well. The final spot is up for grabs and whether the #TigersInDecline can hold off the Broncos to me seems unlikely but the on-field results don’t seem to reflect that in the Elo ratings.

As an aside, I have to say that I am very happy with how this index has come together. It has kept track of the hot form teams extremely well (that is, the teams that the dumbest commentators call premiership favourites after a few good performances, in complete ignorance of their flaws as a club). 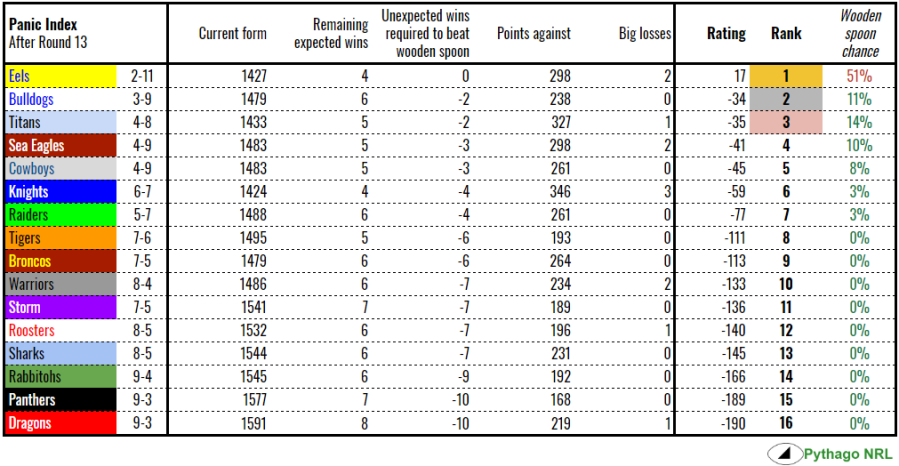 This is where we get express. Parramatta are more likely to win the wooden spoon than not. They have a positive rating which is a first in 2018. I think a lot of the fanbase has written the season off and starting to turn to figuring out who is at fault. Brad Arthur? Mitchell Moses? Corey Norman? Jarryd Hayne? Feel free to join the wild speculation on Twitter or, if you want a more measure take, see the gang at The Cumberland Throw. 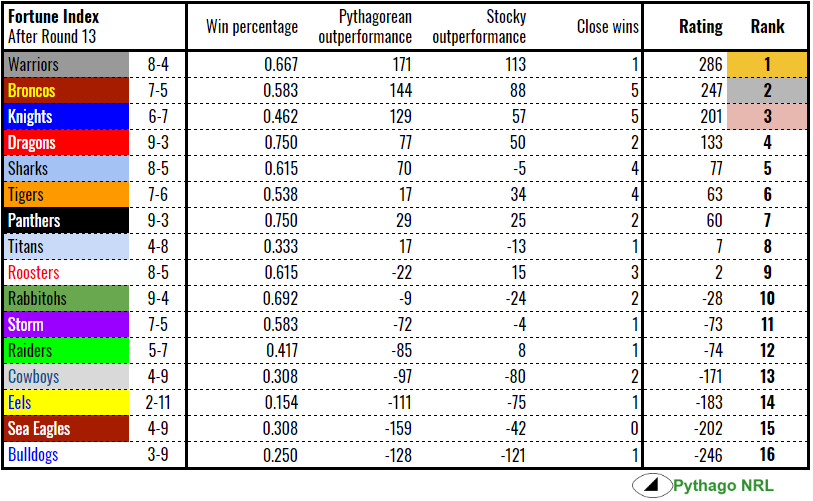 Warriors still on top here, which is not surprising seeing as they didn’t play this week. As perhaps one would expect, we see North Queensland, Parra, Manly and Canterbury underperforming expectations. The Warriors, Broncos, Knights and Dragons are outperforming but we’re getting to the stage of the season where I’m not expecting a reversion to mean and these results will carry through. 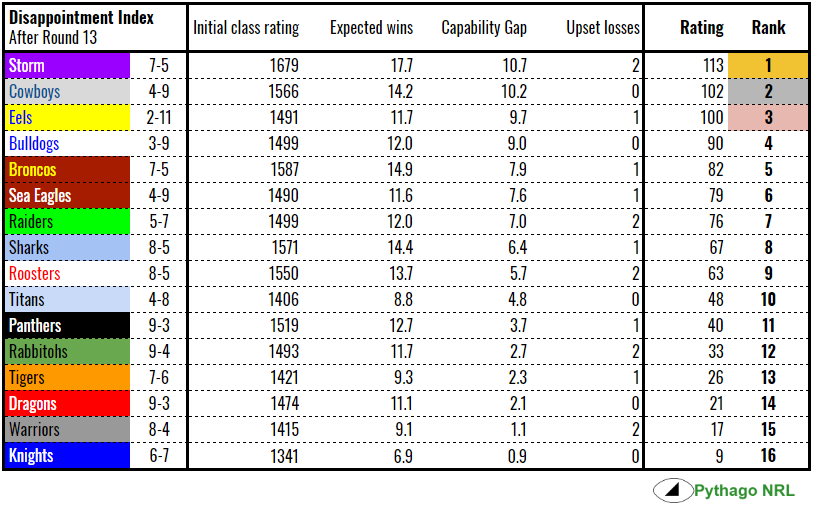 It comes down to next week. I’ve been saying that for a while but now we have the Storm, Eels and Cowboys all within one win on their capability gap. A win for Melbourne and losses for the others should see the order change. Given that the Eels are playing the Cowboys next week in Darwin, one of them are going to lose and it’s probably going to be Parramatta. In that scenario, the upset losses might be enough to keep Melbourne on top but eventually the blue-and-gold will need to accept their mantle as the most disappointing team of 2018.

Dave Taylor tried valiantly but it wasn’t enough to stop the Choppers rolling over the Goats. In a round of somewhat surprising results, Easts beat a recovering PNG Hunters at Coorparoo, Wynnum-Manly beat the potential wooden spooners in Mackay and the Pride beat the Magpies in a high scoring game. The Bears flogged the Jets, confirming that short dropouts are one thing but winning is another and Burleigh are well on their way to another premiership. Redcliffe put an end to the Tweed’s unbeaten run, despite the Seagulls fielding some NRL quality players. The Falcons won a last minute thriller against the Devils. The runners-up secured just their fifth win of the year.