I don’t even know why we bother playing the full eighty minutes (and by “we play” I mean “I watch, you do”). Most of the games this weekend were decided in the last fifteen to twenty minutes, negating the previous hour of play. And in most of those cases, the previous hour did little to build suspense, as much as it did disgust and frustration. I guess what I’m saying is that it wasn’t a great round of footy. Cronulla and Melbourne got hard fought wins against decent opponents. Scrappy wins for the Dragons, Broncos and Rabbitohs won’t leave those fanbases satisfied. The Bulldogs, Sea Eagles and Titans, on the other hand, won against the odds so maybe their fans will be happy. 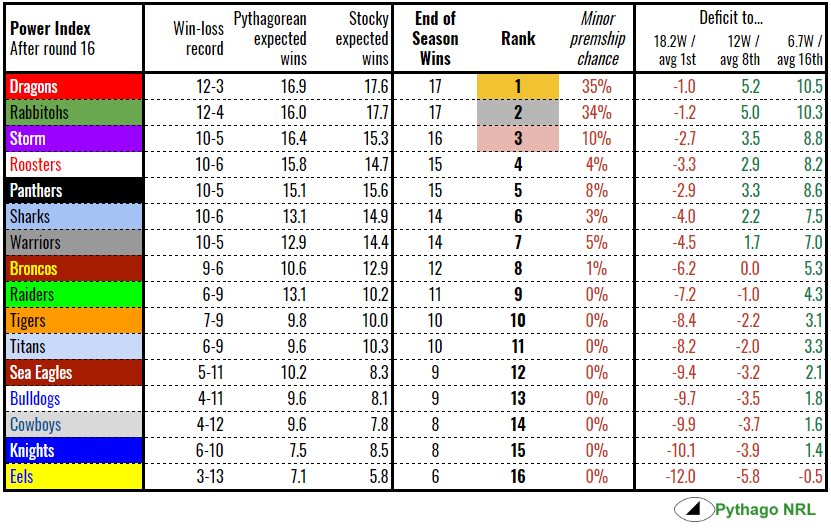 Penrith have, as we say in the gronking industry, rather pooped the bed on this one. They’re not out of the running for the premiership, yet, but their chances of finishing at the top of the table have taken a real belting over the last few weeks. Not that long ago, we had them in a premiership triumvirate with Souths and St George Illawarra. While those two go on to win games, admittedly barely, the Panthers have fumbled the ball. This has opened the door for Melbourne and Sydney to come in and start sniffing around for top four finishes.

If you’re wondering, looks like this year will require 26 points to make the finals. We have the Broncos on twelve wins (plus the bye) in eighth. The Raiders are below that on eleven and the Warriors above on fourteen.

As just about everyone observed after the conclusion of Raiders-Broncos, the top eight looks to be just about set. There’s still an outside chance for the Tigers and the Raiders (who have the bye next week) and, somehow, the Titans. Brisbane and Gold Coast face off in the other Queensland derby next week which you’d think will finish off the Titans season. That will leave six points between Brisbane and Canberra/Wests with only eight rounds to go. They’ve done pretty well considering. Like the Tigers and the Knights, they didn’t make the finals but they’ve done a lot better than I had them pegged.

This appears to be all over bar the shouting. Parramatta are now just about evens to finish last. Only North Queensland and Canterbury could possibly rescue them, at about 16% each. The Eels remain the only team with a positive panic rating, so the tag Panic-matta™ feels justified, especially after their piss poor inability to close out the game against the Dragons. 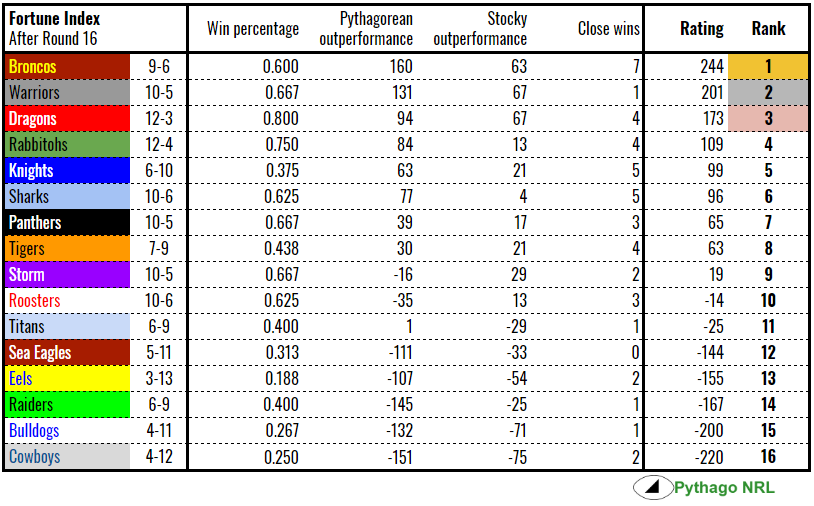 The Broncos have been kissed on the dick yet again. Not from #refsfault but courtesy of their ability to outperform their Pythagorean expectation. The Broncos are in the top eight but aren’t even close to a positive for-and-against on -40. There’s a really good chance that Brisbane will hang on to this title to the end of the season, especially when they choose not to win games by much more than a handful of points. They’re like the 2017 Roosters but not as good.

The Stocky forecasts have more or less lined up with how the teams are performing. 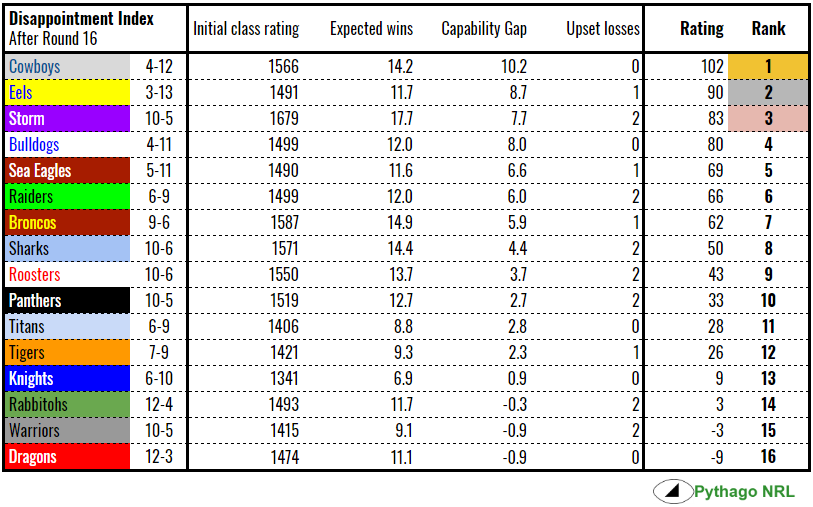 The Dragons join the Warriors as officially not disappointing with both teams now registering negative disappointment ratings. Souths are not far off.

At the top, the Cowboys and the Eels are clear off in space. While I don’t expect the Storm will be able to win enough games (they would need eight from their next nine) to go negative, they will continue to drift down the standings as other teams fail to win games and move up the standings.

Reverse rivalry round delivered some closer games with better contests and, let’s face it, better defence than their premiership counterparts. The Tigers went out to an early lead over the Jets and resisted a fast-finishing, short-dropping-out Ipswich to hold on for the win. The Pride beat the Blackhawks in Atherton, presumably taking a game on the road while Souths played North Queensland at Barlow Park, sealing it with a 76th minute field goal. It was all one-way traffic in the second half as the Capras flipped the result from round 3 against the Cutters. The Norths-Souths curtain raiser saw six tries scored in the first thirty minutes before exhaustion got the better of both teams, turning into a battle of who can push rope the hardest with the Devils coming away victors. Burleigh handed Tweed just their second win since Kane Elgey and a host of other NRL rejects joined the team and started to turn their season around. Redcliffe crushed their bayside rivals in Wynnum-Manly and the Hunters won their grand final rematch with the Falcons.