The short round deserves a short recap. Melbourne and St George Illawarra played out a defence-less try-fest that was extremely entertaining, although not a game for the purists, and the Dragons left Melbourne with another loss. Penrith demolished the Warriors at home with the New Zealanders not being offered a look in against their Origin depleted opponents. Canberra pulled off a miraculous last minute win over Canterbury, instead of being the victim of one for a change. Brisbane secured their biggest win of the season over the Gold Coast and only their third from ten with a margin of more than six points.

For the last few weeks, I’ve been talking about the new premiership triumvirate, consisting of Souths, Penrith and St George Illawarra in contrast to our pre-season triumvirate of Roosters, Cowboys and Storm. Melbourne’s recent performances, while not as guaranteed and as dominant of old, are staking a claim for there to be a premiership quadrumvirate.

As we know, finishing in the top four has been a prerequisite for all NRL premiers, so this becomes quite important. The Stocky has forecast the Storm as having a slightly better chance of finishing as minor premiers than the Panthers, although it’s accuracy is pretty debatable so we could consider them on level pegging and that this would be a likely top four. More concerning is the apparent slide in form for both Penrith and St George Illawarra over recent weeks. They are both sitting mid-table on the below hope index, while Souths and Melbourne headline. The run to the finish will be important for staking a claim for winning the grand final. 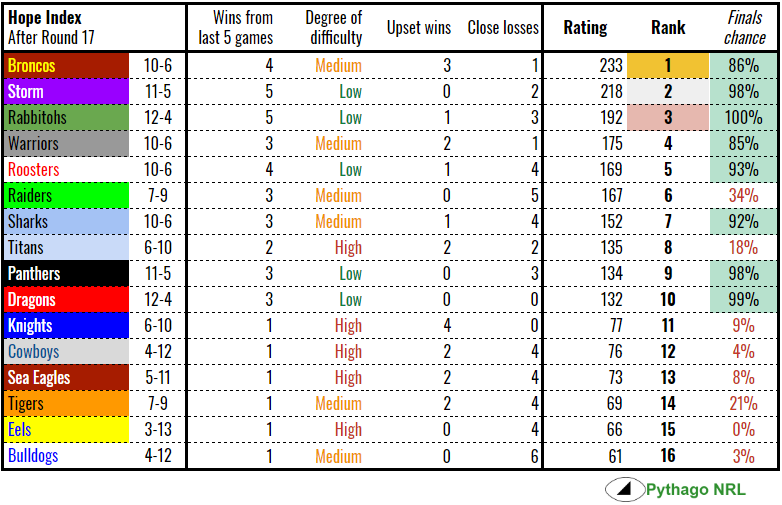 Now that the finals places are all but settled, it’s time for a little reflection, otherwise known as masturbatory self-congratulation. Buzz Rothfield predicted four out of the eight teams that are on track for the finals, so was about as accurate as a coin toss. I picked five in my pre-season review. I had the Cowboys, Eels and Raiders in with the Sharks, Rabbitohs and Warriors missing out. Given the way the Raiders have played, they should have closed out a number of games and be giving the Warriors a run for their money, so I feel like I can claim 5.5 thus proving I am the expert now and every one of my dumb gronk takes is perfect. Do not @ me.

Panicmatta™ continue to dominate the panic index. It’s evens for them to win the wooden spoon but, realistically, there’s only one win between them and Canterbury and North Queensland. The Eels have a very rough run home, including Souths, Easts, St George Illawarra and Melbourne, but also face both of their bottom feeding rivals. It ain’t over yet. 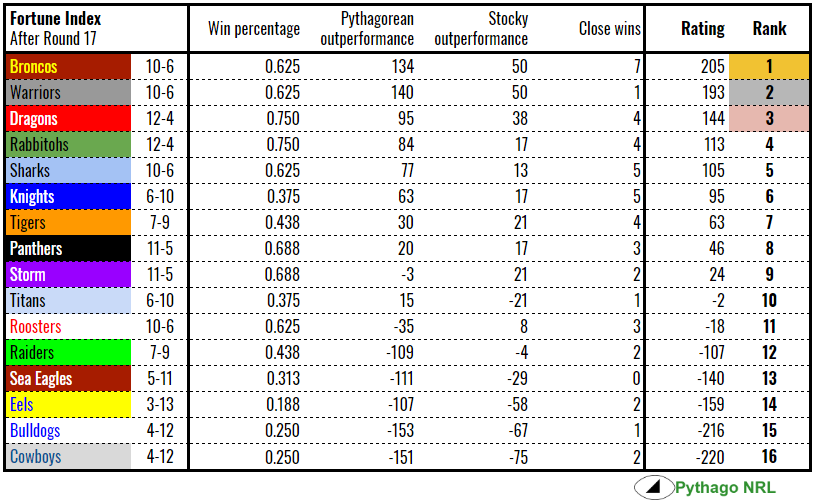 The Raiders are surprisingly close to a .500 record despite having a close-to-disastrous season. Their performance aligns pretty well with what the Stocky/Archimedes rating has for them but Canberra are way under what Pythagoras would have predicted for them (which would be close to 9-7, rather than the other way around). Depending on where those wins would have come from, the Raiders likely still wouldn’t be in the top eight.

Strikingly, we consider the Bulldogs and the Cowboys less lucky again. Both are on about -60 on points difference with six and four close losses respectively. If they’d played at their Pythagorean expectation level, they’d be on six or seven wins by now. It wouldn’t be enough for them to be in contention but it would be a lot less embarrassing than what has been dished up so far.

Interesting that Parramatta appear to be well on course for the wooden spoon but aren’t the most disappointing team of the year. While the way this disappointment index is assembled may not precisely align with your own heuristics, it seems to me that Parramatta were touted as contenders but not necessarily premiership favourites while the Cowboys were one of three teams we could reasonably foresee in the grand final. While the Roosters and Storm eventually got their acts together, North Queensland couldn’t be further from this goal.

The trick this week was to be a team in green. Ipswich, Wynnum-Manly and Townsville all recorded wins of varying margins, with the Jets flogging the officially hapless Cutters and WMS only just edging out their fast-finishing feathered rivals in the Flockbuster. Easts have now won five of their last six to find themselves popping up in the ladder on our graphic for the first time in ten weeks. Souths Logan need to find some form if they are to stay in finals contention, going down to the Capras in Barcaldine. The Devils upset the Bears for the second time this year and Norths are responsible for 40% of the Burleigh’s losses. Redcliffe, as expected, are powering, mowing down PNG at home.

Townsville retake the comp lead from Burleigh, after losing it last week. Three wins now separate ninth from first. It’s going to be a tight run into the finish with points difference being important. Tweed (-81) Easts and Norths (both +4) have the worst of the finals contenders. Townsville and Redcliffe are separated by two points, 166 plays 164.