With the late game on Sunday night, itself because there was no Thursday game thanks to Origin, I decided to push this out to Tuesday. That means that if you wanted a recap of the individual games, you would’ve read one by now. So that’s bought me an extra day to swallow my feelings about the Broncos loss and pull together this post and forgo the introduction that I’m pretty sure no one reads.

Both of the latter teams now sit in the top four of both the ladder and our Power Index. As we get later in to the season, we really should give less weight to Pythagorean wins and more weight to the Stock projections. If you look closely in the third column of numbers, you’ll see that Cronulla has 15.9 wins, devilishly close to a projection of 16 wins for the end of the regular season. That’s higher than the Warriors, Roosters and Panthers and the same as the Dragons. I know the Sharks have had an easier run but they are looking on track for a top four finish. If the Dragons don’t start winning games again, they will be the ones to make room for them.

There has been no grater demonstration of how good the Hope Index is than my last couple of weeks. The Broncos have been right up the top of the Index for the last couple of recaps, as they start to string together some form. The round 17 flogging of the Titans had me primed for a strong run into the finish of the season and wondering if a preliminary final was on the cards (I wasn’t thinking premiership, I’m not that stupid). My hopes were extremely elevated. And then Brisbane ran into a New Zealand wall in the Suncorp sunshine on Sunday. Sigh.

The net result is that Brisbane’s finals chances have taken a whack, now sitting at 66% and the only top eight team that is a reasonable chance of not making it to the end. On their tails are the Raiders – whose form rating has improved by about 50 points since Josh Hodgson returned – and the Tigers – who are 4-1 against top four teams and pretty much have a run of top four teams to finish. It’s a potentially more interesting season finale than we had anticipated. 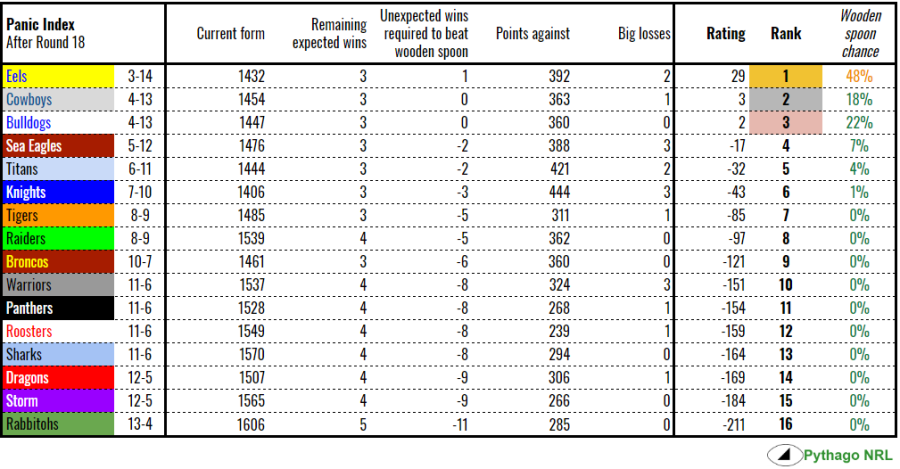 As good as the Rabbitohs have been, the Eels have been as bad. The wooden spoon race is pretty much down to three teams at this point, and they occupy the top three places. A solid 88% of simulations finished with one of them in last place.

We had Parramatta as the most panicky team in round 4 and had them on a positive rating in round 13. Nothing they have done, other than the brief glimmer of hope offered by a return of Clint Gutherson which was just as quickly snuffed out by reality, since then has disabused me of the notion that the Eels, in all likelihood, will take the wooden spoon.

I think it’s interesting that the bottom four teams on the Fortune Index are four for four of bottom teams on the ladder but the top four are eighth, seventh, eleventh and third. I’m not sure if there’s anything to read into it. Perhaps other than to conclude that the Storm, Panthers, Roosters and Titans are at “their” level.

As confident as I am in the Eels getting the wooden spoon, I am equally confident that we probably won’t see too much more movement on the Disappointment Index. I think, best case, Melbourne might continue to slip down the listings. With seven games in hand, and a likely 16-8 record or thereabouts, the Storm’s capability gap would be less than two wins. That would put them into the bottom six as things currently stand. Meanwhile, the Jackasses of Red Hill might be lucky to crack twelve wins, leaving their capability gap in the vicinity of three wins, or on the edge of the eight as they are now. I also expect Sydney, Cronulla and Canberra will slip under the Gold Coast by the end of proceedings.

We’re getting down to the pointy end of the season now and the logjam of teams is starting to clear but remains very crowded. The ladder breaks down as follows:

There’s six games remaining in the season and (I think) six teams go through to the post-season. The top three are probably locked in with the minor premiership possibly going to be decided in a few weeks when the Dolphins visit the Blackhawks. Both the Devils and Pride have comparatively smooth paths to the finals, facing a mix of teams that are out of it with a couple of challenges sprinkled through. The Magpies have a tough run in – facing Townsville, PNG and Burleigh in successive weeks – while the Tigers have found some form from somewhere and are charging. Easts and Souths will face off in round 23, which may be for the last finals place. The rest are going to need some luck.