St George Illawarra have embodied this in recent years, having gotten out to lightning starts, 6-0 in 2018, 6-1 in 2017 and 6-2 in 2015, only to fade in the back half of the season. In those seasons, the Dragons finished seventh (15-9), ninth (12-12) and eighth (12-12) on the ladder respectively. Remember in 2017 when they just needed a win over the Bulldogs to make the finals and couldn’t do it? The Cowboys took their place in the top eight and went to the grand final. That’s pure April premiership right there.

Those kinds of incidents stick in our memories but I don’t think they’re actually that common. I think whichever team is on top of the ladder by the end of April will probably still be there or thereabouts come September and thus “winning” the April premiership should be considered a good thing. Let’s take a closer look. 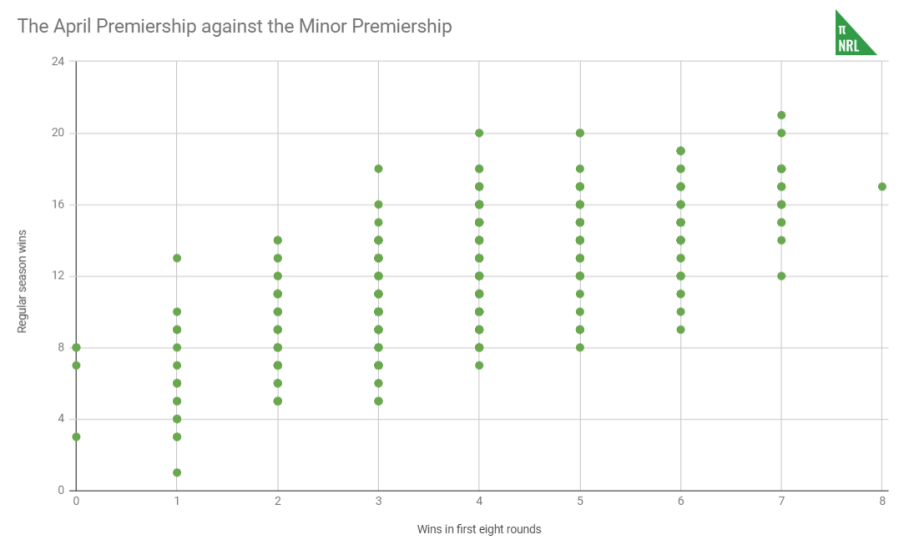 It shouldn’t be much of a surprise that there’s a decent correlation (coefficient of correlation = 0.45) between early season form and whole of season success. The more games you win early, the more games you’ll probably win overall. This relationship only strengthens as the season continues, rising to 0.72 by round thirteen.

That tells us that the April premiers aren’t likely to fall off their perch atop the league but this graph does show the range of possible outcomes. A number of teams have registered six wins in the opening eight rounds but failed to win another six games in the following eighteen rounds to get themselves into the finals. By the same token, some teams get to the end of April close to .500 and then go on a tear to finish on 20-4, about the best you can do in the face of the general chaos underlying rugby league. Interesting that the only 8-0 starters, the 2012 Storm, didn’t finish at the top of the ladder that year but did win the premiership.

The worthwhile takeaway is the spread of teams above and below the twelve win mark. In the NRL era, teams with eleven wins or fewer are typically playing September footy thanks only to salary cap penalties, which was the case for the Raiders in 2002 (10-13-1) and Titans in 2016 (11-12-1). Strangely in 2002, the Dragons also qualified for the finals with 9-12-3 and the Eels in sixth place with 10-12-2, which is a nod to the dominance of the ’02 Bulldogs. The only “legitimate” examples I could find where the 2004 Raiders and the 2007 Broncos, both finishing on 11-13 and both wiped out in the first week of the finals.

What the graph doesn’t tell you is how frequently teams with a given record in April go on to make the finals. That’s why we have this table:

The way to read this is at any point during the April premiership (rounds 1 to 8), you can take your team’s record and find their likelihood of making the finals. If your team starts 4-2, you go down the first column to 4 and the bottom row to 2 and where they meet, you see 80% of teams that had that record went on to make the finals:

This is across the entire NRL history, so includes the top ten finals in 1998, several salary cap scandals and a few years between the return of Souths and the introduction of the Titans where there was a bye every week. Teams in those seasons might not have played a eight games by round eight. A case in point would be the 2006 Rabbitohs, who started 0-13 but had an early bye, so show up in this table under 0-7. I probably don’t need to tell you that they didn’t make the finals and in fact finished 3-21 with the wooden spoon.

Overall, it mostly reinforces the idea that being April Premiers is pretty good. If you can get seven wins in your first eight games, you are almost certain to finish in the top eight. With six or five wins, you are still extremely likely.