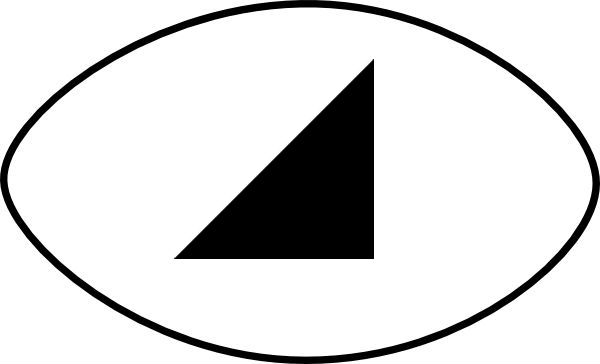 The start of the AFL season ushered in a series of gushing articles about how wonderful the nearly 45,000 average attendance for the first round was and how the NRL’s struggle to get even 15,000 to their games was an indictment on the code and a sign that its demise was imminent. This is the perfect example.

It’s a giant pissing contest between the codes that makes for clickbaity but uninteresting and uninformative copy for the producers of sports content. These stories don’t tell you anything because there’s no analysis, just regurgitation. I think a closer look will yield something more interesting.

Using attendance as a proxy for popularity or financial stability is a bit problematic. In theory, a team that gets bums on seats is a team that will get eyeballs on TVs and put dollars in the bank.

This idea glosses well over a number of things that can affect attendance: weather, star power of individual players, on-field success of the home team, marketing, off-field mismanagement, stadium quality, access to the game, time of the game, proximity of the teams, rivalries and the alignment of the planets.

At a far enough distance, a lot of these variables will cancel themselves out. I’m looking for underlying patterns. 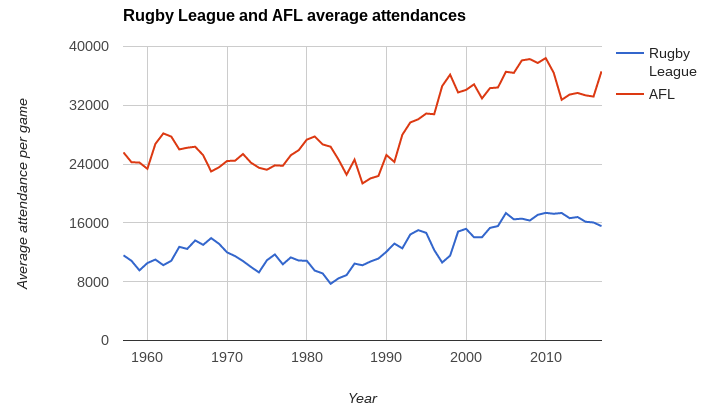 The numbers were up-to-date to rounds 7 and 4 of the NRL and AFL respectively.

There’s a couple of interesting things here. The one that immediately jumped out at me was the massive dip in attendances in AFL over the last five years. This year’s widely celebrated increases in attendances only take the AFL back to the trend in place up to circa 2010 and has dropped markedly from the start of the season to now. It’s almost as if people got really excited about the new season (maybe because of the AFLW) and then when they actually attended the games, realised it was more of the same and started to stay home again.

Meanwhile, NRL’s attendances are definitely in a downward trend since the 2010 high water mark but it’s not been an especially steep descent. This year might even match or top the previous year once the well attended finals are over. Rugby league has come back from worse attendance situations, such as the mid-1980s after expansion into Illawarra and Canberra but before Brisbane and Newcastle, and the late 1990s Super League war.

I guess some of the early “panic” was because there’s no neat narrative to explain why attendances are in decline. The worst take I read tried to pin the decline on the Super League civil war that happened twenty years ago. There would be adults watching the game now who weren’t even alive then and certainly don’t remember the Hunter Mariners or the Adelaide Rams.

The other is in the trendlines: 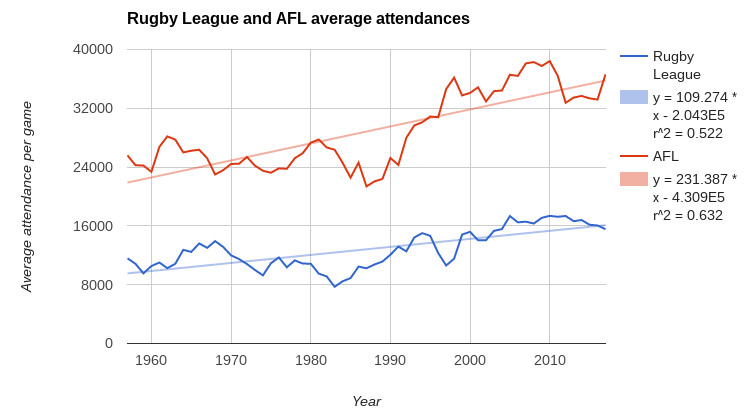 For every year that passes, on average the AFL adds about 231 people to its average attendance. The NRL adds only 109. At that rate, the NRL will never catch up. In fact, the gap has only grown since both games went national in the late 1980s: 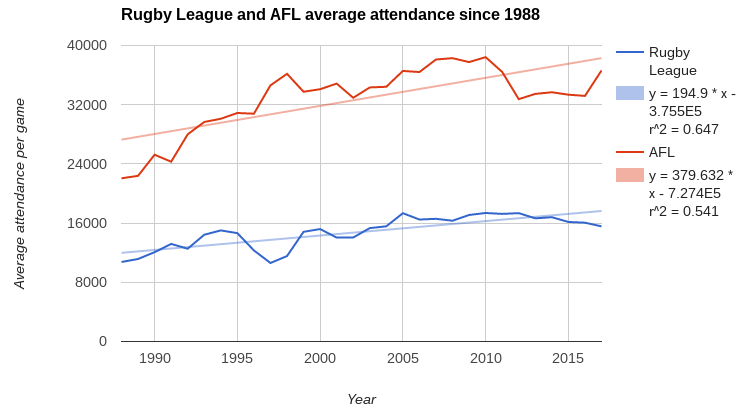 Since getting a team in Brisbane, the AFL has added 379 people to its average attendance each year while rugby league has only managed 194. Expansion has been good for both leagues with the increases in average attendance accelerating from the long term trend but the AFL appears to be pulling away.

Here’s another thing that never comes up. The AFL has only two regionally-based teams: Gold Coast and Geelong. The other sixteen are all based in mainland state capital cities. Even then, the Gold Coast is the sixth largest city in the country and Geelong is twelfth.

The NRL has 4.5 clubs based in regional centres: Gold Coast (6th largest), Newcastle (7th), Canberra (8th), North Queensland (Townsville is 13th) and half of St George Illawarra (Woolongong is 10th). The NRL has more than twice as many games in minor cities than the AFL does, so I wonder what impact the size of the local population has on attendances?

I want to introduce a concept to measures attendances as a proxy for popularity while accounting for the size of the local population. Let’s call it “Cap”, short for ratio of population to total year’s attendance, which is an inverse per CAPita measure.  We’ll explore the implications of this in more detail next time.