As I suggested in the Tips post, there were a few upsets this round but they weren’t the ones I was expecting. I said it was “hard to imagine” the Eels and Warriors getting up but they did, even if the Warriors were pretty lucky to get a last minute, and winning, penalty at the time and place they did. The Cowboys didn’t really look like they were in the same contest as the Eels, although I think any praise for Parramatta above “competent” was excessive (words like “clinical” and “on fire” against a team that is barely holding it together suggests a lack of perspective).

I did say I was nervous about the Bulldogs-Raiders game and I was right to be wary but the Sea Eagles had the biggest win in the second highest scoring round of the year (329 points, after 390 scored in round 2). It looked like going the same way at WIN Stadium on Sunday and at Suncorp Stadium on Thursday but the underdogs managed to claw back some respect on both occassions as the Storm and Broncos got out to big, early leads.

The Storm extend their lead in the Collated Ladder this week. Previously, they were one win up on the chasers with 17 projected wins. Melbourne now have 18 wins in the pipeline and are three clear of their nearest rivals, Cronulla and St George Illawarra. I think the Stocky has overreacted somewhat to the Dragons’ loss over the weekend, so I would expect that gap to close somewhat over time.

Further down, we still see Canberra hanging in top four thanks to a very high projected wins by Pythagoras. If their current form continues, that will come down somewhat in the next few rounds. Manly’s expected wins are about even now but I think the system is overrating their form and we will see a correction that allows the Bulldogs a look in to a finals berth.

At the other end, the Rabbitohs got hammered by the Sea Eagles and the Stocky, now occupying second last place on the ladder, unfairly below the very lack lustre Panthers side. No one will be dislodging Newcastle from the wooden spoon position and the four projected wins is looking like a tall order at this stage.

Melbourne are outright favourites for the minor premiership, at nearly 50-50 odds with the rest of the competition. The Sharks and Roosters are an outside chance. The Dragons copped a hammering and the Sea Eagles a massive boost which I expect to see reverse in the near future.

In the wooden spoon race, Melbourne is now a zero zero chance of finishing last with the eventuality not coming up once in 10,000 simulations. Meanwhile, the only threat for Newcastle’s third consecutive wooden spoon is Souths, although I would expect the Panthers’ chances to be higher than is suggested below. Ultimately, a couple more losses should seal Newcastle’s fate. 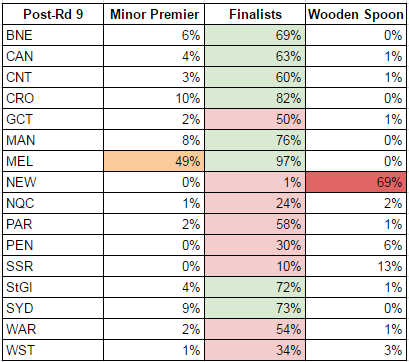 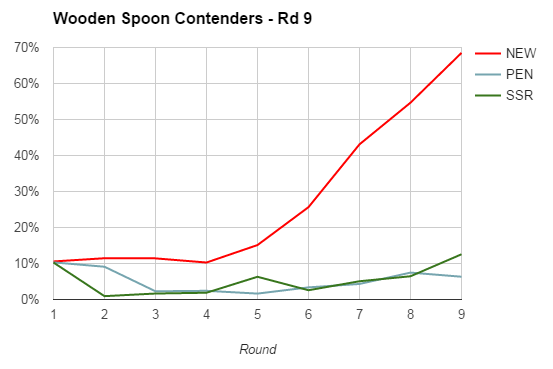 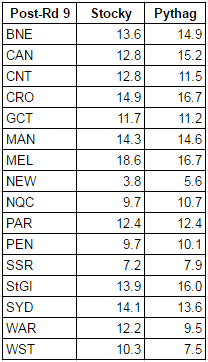 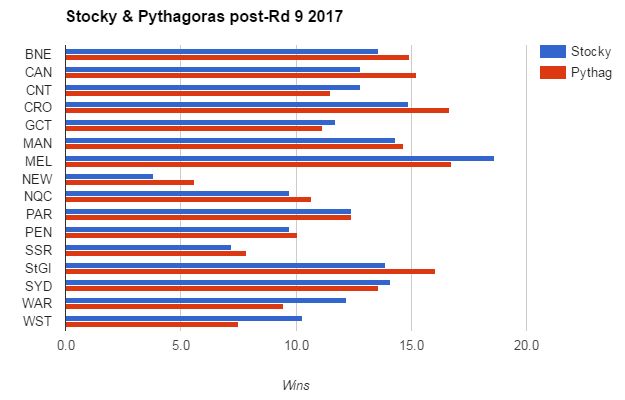