What a round! High scoring, plenty of upsets and more than a few that went right down to the wire. It was the highest scoring round of the season. The Titans downed the Storm, the Knights downed the Raiders and the Panthers came from well behind – 22 points down at half time – to take down the Warriors. Cronulla managed to grind out a win over St George Illawarra, a side lacking in their usual stars, while North Queensland, another side lacking in star power, handily accounted for Canterbury in Townsville.

It was a crap round for my tipping, gaining just three from eight, but I don’t think I care. The Titans’ upsets and near-upsets have been my highlight of the season so far. A slight stumble for the Dragons and the Storm while the Sharks, Roosters and Broncos march on makes for interesting prospects.

We now have our third ladder in four rounds with the Sharks sitting atop the pile. Just, based on their Pythagoras. There’s clearly four (maybe five, depending on how you feel about the Dragons) teams in contention. There’s really just clear air to the rest in terms of what we’ve seen on the field.

Western Sydney sides are not having a great 2017 with all four having exited the top eight. This roughly accords with how I feel about them with none showing any real, consistent promise. I might have felt differently if the Eels and Bulldogs had at least given their opponents a run for their money. The Warriors and Rabbitohs still belong down there with them, especially after NZ gave away such a massive lead. The Raiders went down to the Knights, a surprising result to say the least, but I’m not writing them off just yet. Their Pythagoras is too high. 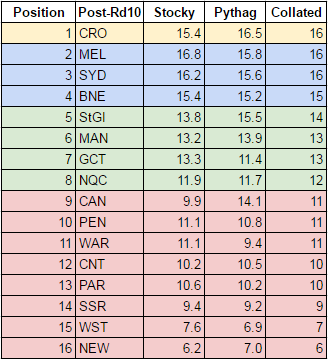 A stumble from Melbourne against the Titans has knocked them back down to earth. Brisbane, Cronulla and Sydney are now in contention for the minor premiership. Euclid loves a big win so the Roosters’ demolition of the Eels has probably resulted in over-rating. The Storm are still 8-2, a very good start to the season, will be doing some rating repair over the next few rounds and their chances will rise accordingly. Incidentally, posting eight wins puts them well above the wooden spoon average of 6.5 wins. The Broncos and Sharks are edging forward, at least keeping the others honest.

And it’s amazing what a win does for Newcastle’s chances. Not only has the 60%-odd chance of them winning the wooden spoon come down to 40% this week, their chances of winning the minor premiership have gone from zero zero to 1 in 10,000! Despite Wests being well beaten by Souths, Newcastle are still in the box seat and given they’ve only won nine since the start of 2015, it would take a surprising resurgence and a collapse from another team for them to get up and out of last place. I guess there’s a 60% chance of it. 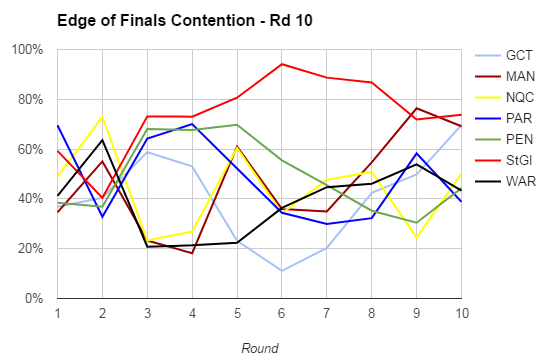 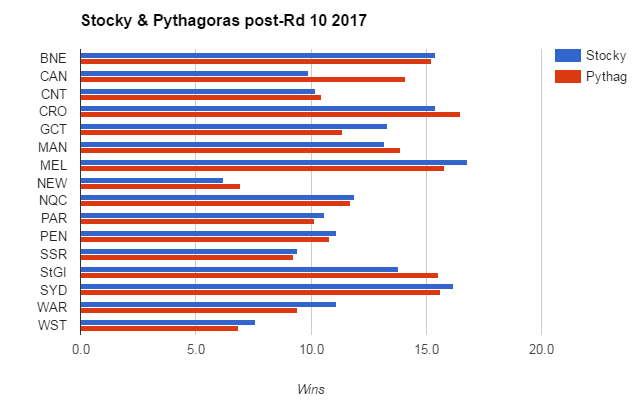