I don’t know whether you’d agree with this statement: it was a pretty good round. We had close match-ups up and down the ladder with 1st v 2nd, 7th v 8th, 9th v 10th and 11th v 13th yielding some great games. No one saw the Panthers putting two tries past the Raiders in the last couple of minutes to take the win in Bathurst. I’d already written them off, wondering what jokes I could make about their performance. We saw an absorbing battle between the two minor premiership contenders with the final outcome only becoming clear after Kaufusi crossed the line with six to go. Newcastle were robbed of a victory by poor refereeing and I don’t often agree with the #RefsFault crowd. Souths gave the Donkeys a tense run for their money but Brisbane managed to keep them at bay.

Meanwhile, the Titans couldn’t have been further from the team that brought down the Sharks and Storm. At some point, someone will flick the lever into crisis mode, although perhaps its always been there. The “Territory” Eels didn’t seem interested in playing on a hard, crew-cut surface in Darwin, even though it was their home game and it showed in the scoreline against the Cowboys. Speaking of, the Tigers went down very hard in a scrappy game against the Roosters in Campbelltown after showing a lot of promise in the first half. The Dragons surprised everyone by not scoring a single try against a Bulldogs side recovering some dignity after last week’s flogging.

Melbourne, after defeating Cronulla, go two wins clear at the top of the Collated Ladder. Their Pythag is not so impressive but their Stocky performance is well above the others. The Roosters, Sharks, Dragons and Broncos (Saints just edging the Donkeys on Pythag) are chasing but losing ground. Manly and North Queensland seem to have locked down their finals spots. The final battle for eighth is probably the most exciting part: Penrith’s recent run of form has them sitting pretty but Canberra and, surprisingly, the Warriors are still a chance.

The bottom is much the same with the Titans finally giving up hope and looking at nine wins, Souths eight, Wests seven and Newcastle six, although based on this round, you’d really wonder where any of those are going to come from. 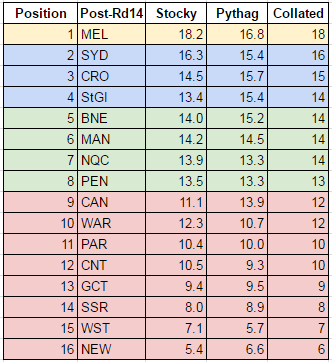 Melbourne are now odds-on favourites to win the minor premiership. No surprises there. The Roosters have a very tough run to the finals having to face both the Sharks and Storm twice. I guess if they can luck out a win or two in there which will help push their chances up while simultaneously costing their rivals. You wouldn’t tip it but there are some big games in there. Manly, North Queensland, Brisbane and Cronulla are all dark horses, ready to pounce if Melbourne or Sydney muck up.

Newcastle are down a little in their wooden spoon race after a near-miss win against Manly and Wests are up a little after being belted by Easts. There’s only one win difference between the two currently on the board and it’s still very tight as to who will finish on the bottom, although the Knights are twice as likely as the Tigers. 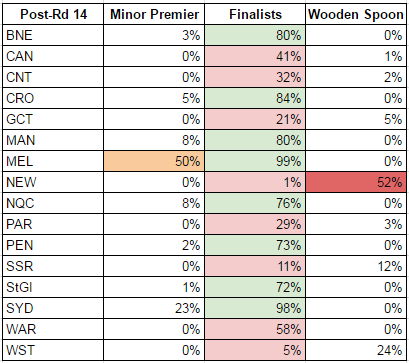 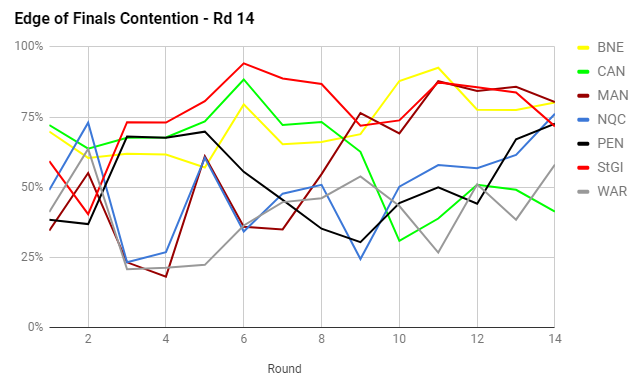 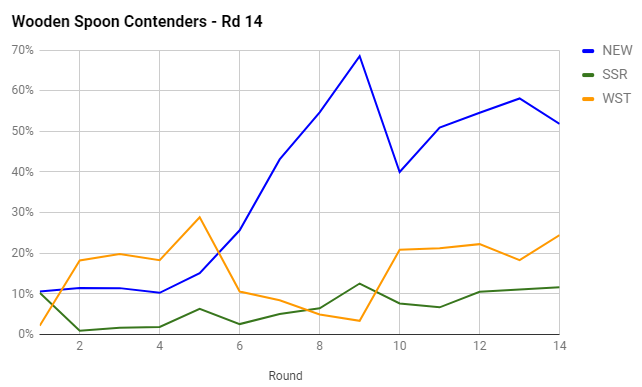 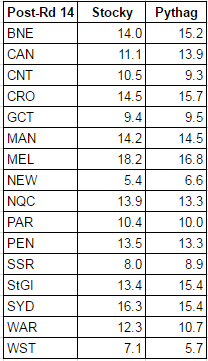 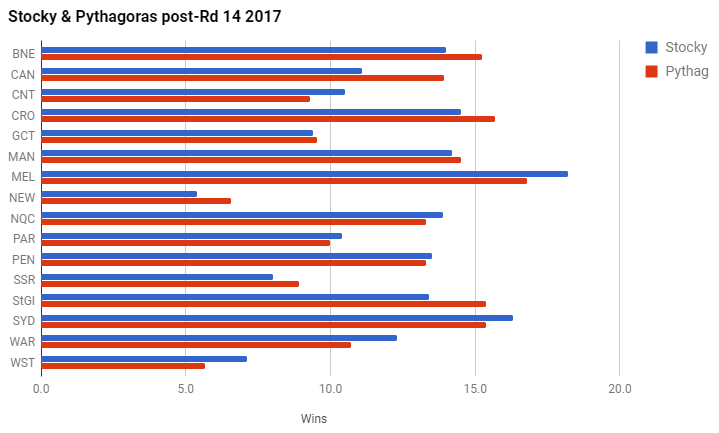