The round kicked off on Friday with a scrappy game in Auckland between the Warriors and Bulldogs. Errors were the order of the day as the New Zealand side managed to eke out a win in a game neither side seemed to control or, for that matter, want to win. This was followed by a dismal crowd at a frosty Campbelltown to see two of the worst sides in the NRL take to the field. In lieu of the classic promised by the commentators, it was an error-ridden, poorly structured affair that no one wanted to watch. The Titans eventually came up trumps over the Tigers.

Saturday was the palate cleanser with a tight encounter between a JT-less Cowboys and a Panthers outfit looking for a finals berth. After starting in a Freaky Friday-style body swap, with North Queensland playing as Penrith and vice versa, the Cowboys re-ran the Origin encounter from earlier in the week and managed a late, spectacular try from Kyle Feldt and a sideline conversion by Ethan Lowe, cool as you like, to wrap up the game. The Broncos and Raiders traded early blows in Canberra before the halves combo of Benji Marshall (he still has it, it turns out) and Ben Hunt took control of the game and drove home a Brisbane victory. In Adelaide, a massive crowd turned up to watch the top of the ladder clash. Melbourne looked in control, despite missing their star spine, until two conceding two late tries to City, forcing golden point. Mitchell Pearce fluked a win with a field goal in the 85th minute.

On Sunday, the Dragons managed to halt their slide into mediocrity with a scrappy from behind win against, wait for it, the Knights. A team that everyone has chalked in their diaries as a win made St George Illawarra work for it, leading 28-10 at half time. Unfortunately, Newcastle faded/let Saints back in and they finished 32-28. In Cronulla, Manly handed out a belting to the Sharks, continuing their poor run at home. At first, when Cronulla went down 12-0 and then 18-12 at half time, we all figured it was the usual Sharks tactic of doing as little as possible to stay in it and then come steaming home. It was not to be as the Sea Eagles just extended their lead in the second half and a confused Sharks side never looked like getting back into the game. They might have to start trying harder, earlier if Cronulla want a top four finish.

After all the certainty established last week, that’s gone now thanks primarily to Manly’s and Easts’ victories over the weekend. The Stocky had projected 20.2 wins for the Storm, which has been reduced to 17.7 this week, just keeping them narrowly ahead of the Roosters on the Collated Ladder. That would mean that the Storm will go 5-4 in their remaining nine games, which seems pessimistic for a team that’s already 12-3.

The Broncos and the Sea Eagles round out the top four. If Manly continue with their current form against their lesser rated opponents and Brisbane can cover for the loss of their number 1 and number 6, they seem likely to hold those positions. Both teams put in good displays – Manly’s more impressive than Brisbane’s – on the weekend to demonstrate that this may well be the case for the remaining third of the season.

Cowboys are a surprise packet, jumping up to fifth despite a narrow win over the Panthers. The Dragons and Sharks have copped hammerings to their input ratings after a scrappy month for both sides and one or both are at risk of falling out of the finals positions if Parra or New Zealand get their act together. 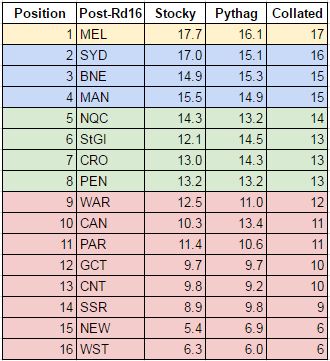 The Melbourne-Sydney game was something of a four-pointer (two points for the winner while denying a close rival two points) and it’s reflected in the damage to Melbourne’s chances of taking the minor premiership. The Storm have lost only three games this season and you can easily see where on the minor premiership contenders chart. The Roosters and Storm have another four point rendezvous before the end of the year which may well decide who finishes top of the table. It will be fascinating to see if the near full strength Roosters fluked one past an under-strength Storm or if the Tricolours are the real deal.

If Manly continue their charge, and with the relatively easy run to the finals this is almost a cert, we’ll have to look at swapping out Cronulla for Manly on the minor premiers chart. The Sea Eagles are now at 15% of a minor premiership – surely a gross overestimation – while the Sharks have tumbled to just 1%.

Meanwhile, the Titans, Bulldogs and Raiders aren’t shown on any graphs due to being a very low risk of achieving anything noteworthy this year.

Finals places have just about been locked in now. The Dragons’ slide in form sees them now less likely to make the finals than the Warriors – 54% to 62%. Those two sides have fairly similar runs to the finals but the Warriors seem to be finally getting into shape while the Dragons are 2-2 from their last four, with the wins against the last two placed teams on the ladder, each by a four point margin. Not what we expected from potential premiership contenders.

Next week’s match between Newcastle and Wests may well decide the wooden spoon. The Knights have a superior for-and-against and a win here will properly move them off the bottom of the ladder. For now, I have the Knights at 50% chance of taking the spoon but the Tigers are closing, now at 35%. 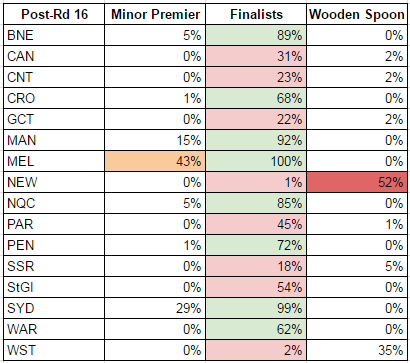 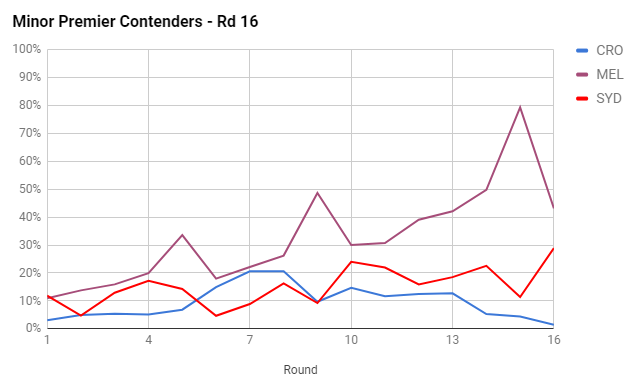 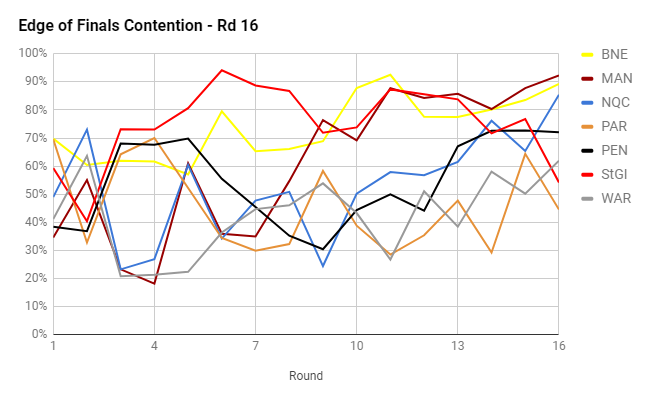 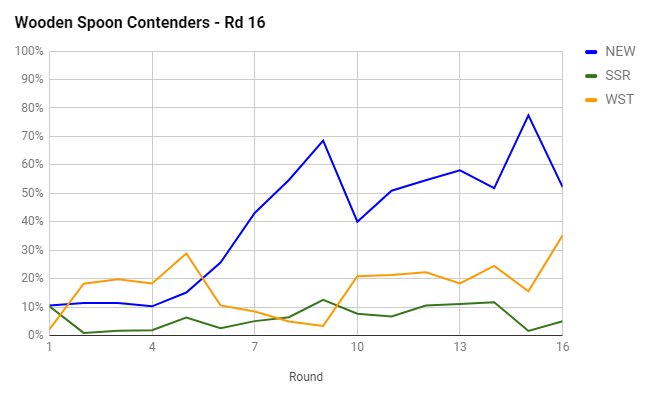 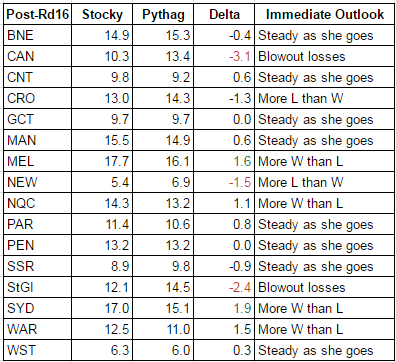 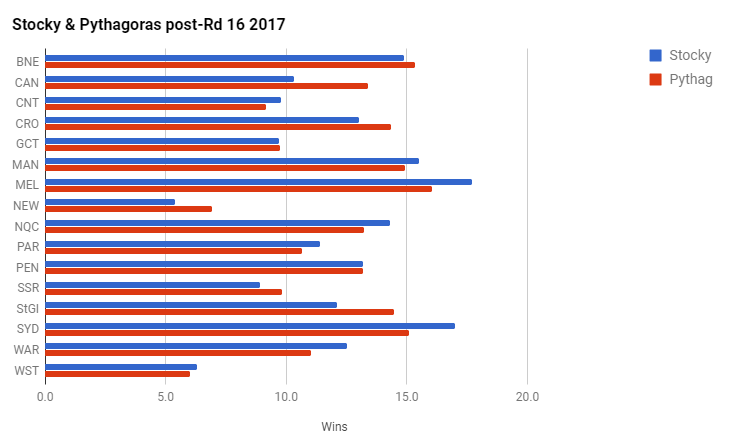