Posted on September 7, 2017 by pythagonrl

If you haven’t checked out the deep dive in this year’s finals yet, I urge you to do so. I’ve sliced the finals every which way imaginable but for the record, here’s my bracket that will almost certainly be destroyed within fifteen minutes of the first game: 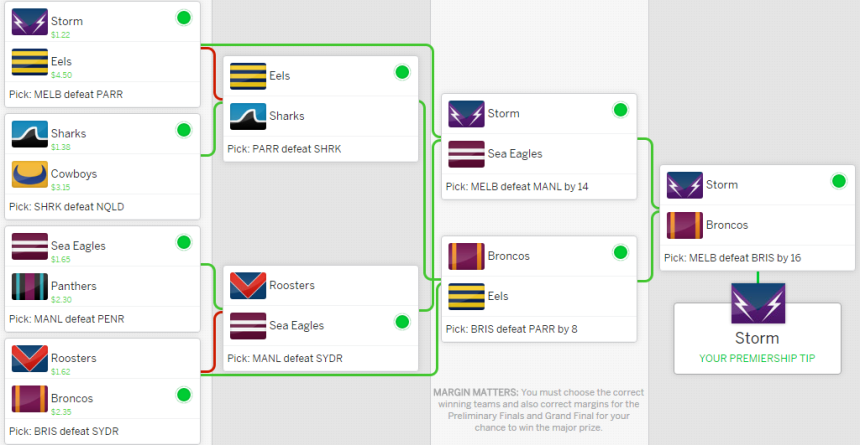 Here’s why I tipped the way I did.

If you’re only going to tune into one final this weekend, not only would I question your presence on this blog (shit’s about to get a whole lot harder), but I would recommend it be this game because it’s the only one paper that might be close.

The Roosters come into this slight favourites, having finished higher on the ladder and playing at home. The regular season record was one win a piece, although the aggregate score of 48-24 is well in the Donkeys’ favour. It’s tighter than Sam Kasiano’s jersey.

One of the big question marks is whether Brisbane are any good without Darius Boyd. Kodi didn’t have a great game as his replacement in fullback but returns to the number 1 jersey this week but given Derrius’ performance against Parramatta, his absence may be more boon than bane.

I think Brisbane will get this. Despite everything they’ve done to me this year, I reckon they have it in them.

I’m not sure enough people read the three thousand words I wrote about the finals this week but I cannot emphasis enough just how good the Storm are right now. Literally the best team in fifteen years. Parramatta have made their first finals appearance since 2009. Even though the 2017 vintage Eels are a pretty good team and they might think they’re in the ballpark, I’m telling them that there is no ballpark and the team has moved.

I have a sinking suspicion that this is the game that won’t go my way and Melbourne have a couple of small vulnerabilities. Get them off-balance by going ahead early in the game. The Storm get worried when they’re behind and put their foot on the gas. The leadfoot leads to mistakes and it could be game on.

Despite that, I’m still going to tip the Storm.

Didn’t we just do this one? And, uh, the Sea Eagles won it pretty comprehensively?

I’ve checked my notes and, indeed, we did just do this one and it was last Saturday.

The final margin was sixteen points but Manly were leading 28-zip until four minutes to go. The Panthers’ soft draw has covered up the fact that the team is basically just Nathan Cleary with a saddle on his back and he’s not good enough (yet) to carry half of western Sydney and the below average players he is contractually obliged to call teammates much further.

As much as I hate, hate Manly (I despise Manly), I’m not that much of an idiot. I’m tipping the Sea Eagles.

Didn’t we just do this one? And, uh, the Sharks won it pretty comprehensively?

I’ve checked my notes and, indeed, I did this bit in the last tip. Also, the last Cowboys-Sharks match was a couple of weeks ago, instead of a couple days ago, and Cronulla won it. And they won the game in round 11.

The Cowboys had a bit of a soft run and the team has looked physically vulnerable in the last few weeks. A far bigger issue is the lack of direction in attack. North Queensland has no issue getting down the right end of the field and then seem to have no idea what to do with the ball. They know how to have the ball, they just don’t know how to score with the ball. And that’s really the most important part of having the ball: the scoring.

Cronulla are relatively good at defense, so North Queensland are going to have a tough time of it. The Sharks’ attack hasn’t been much better than the Cowboys’, so we’re probably in for a low scoring game but one I think Cronulla will win.

Euclid’s had its worst year yet. Eratosthenes is having a good year but not the best. Class been a much better guide for tipping than form this year.