The Broncos kicked off round 12 with an extremely flat win over the Eels in a game that excited no one. Canberra managed to avoid fading away in the dying minutes by taking the lead only in the dying seconds of the game over Manly. The Storm kept the Cowboys at bay with a single try and a field goal, despite fumbling away most of the game. Sydney smashed the Gold Coast, as Cronulla smashed Newcastle. Souths and Penrith won the two games featuring top four teams to cement their credentials as potential premiership winners in 2018. The Tigers won a scrappy affair over the Bulldogs on Sunday afternoon, riding an injection of Josh Reynolds enthusiasm to victory.

Etc, etc. The Panthers have displaced the Dragons at the top of the Power Index. St George Illawarra are slowing down after a hot start to the season. Penrith, despite an injury “crisis”, have built momentum under James Maloney’s leadership and now threatening to have a serious crack at the premiership. I suggested as much was possible in January, along with making a bunch of other predictions which haven’t panned out. Penrith have a couple of easier games ahead but are likely to lose their stronger players to Origin, in addition to their disabled list. We may see some regression to the mean and more losses but that doesn’t imply the Panthers are cooked. Plenty of time left.

The Power Index has gone cold on the Broncos again, despite them wining a dreary affair against Parramatta. Canberra and Wests have been elevated above them to occupy ninth and eighth respectively. The Broncos are forecast to get only four more wins in 2018.

Cronulla are the most hopeful team in the NRL for yet another week. They’ve won six games in a row but they’ve had a pretty soft run since beating the Panthers in round 7. The Broncos are in second place, having gotten four wins out of their last five games. Their performances haven’t been particularly inspiring, so Archimedes hasn’t rated Brisbane all that highly. The result is that the games look harder than perhaps they really area and, as a consequence, their hope rating is higher.

The Dragons, Tigers and Warriors, after hopeful starts to the year, are starting to slide down the Index. The only teams below them are the Storm, who are still comparatively highly rated, and the teams with little-to-no hope of salvaging anything from their 2018 campaign. The fanbases of the Cowboys, Titans, Knights, Bulldogs and Eels would not be feeling particularly optimistic at this stage. This is especially tough for the Knights’ fans after their excellent start to the year and three years of crushing disappointment. 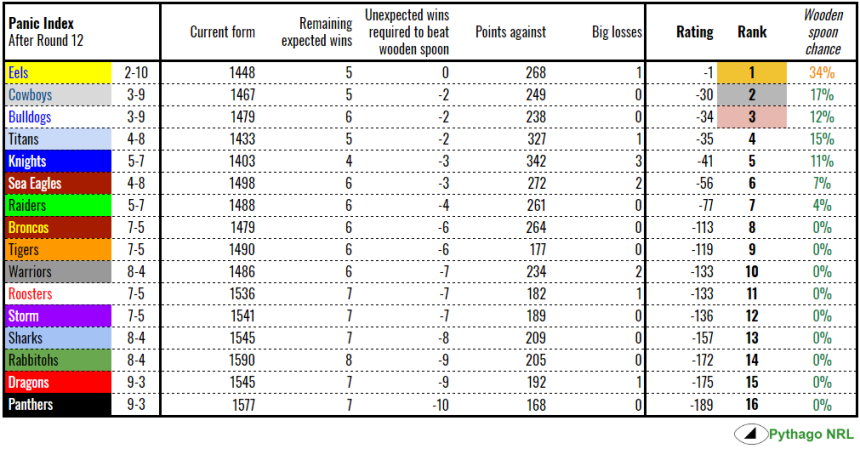 The Eels are sitting where the Sea Eagles were only a few weeks ago. Parra are now a 34% chance of getting the wooden spoon. But Manly were 37% and then they won a few games and it became apparent that they weren’t the total basketcases we all thought. That said, Manly aren’t clear of the wooden spoon chase and Newcastle will feel that familiar sinking in their stomach that is a truly awful season in prospect, possibly made worse by the expectations that were set at the start of the year. The Knights are desperately awaiting the return of Mitchell Pearce in the hope that they might be able to snag enough wins to keep them off the bottom for the first time since 2014.

That year, the Sharks finished on the bottom but there’s a very little chance of that happening again this year. In fact, in 10,000 simulations the Sharks didn’t finish with the lowest number of wins even once. Nine teams are a combined 98 in 10,000 (or less than 1%) chance of winning the wooden spoon. 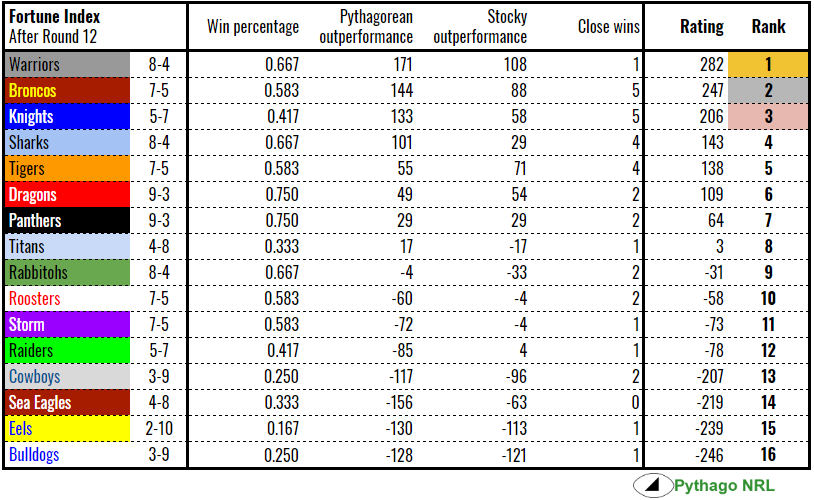 The Warriors and Knights have been boxing it out for the lead in the Fortune Index but the Broncos are getting in the mix of the outperformers. The surprising thing is that the Raiders have slightly outperformed the Stocky’s expectations but are only marginally under their Pythagorean expectation. After all those last minute fade-outs, it seems their 5-7 record (and I guess 10-14 or 11-13 forecast record) isn’t too far off the mark.

There is all of 0.4 rating points – the difference between one and two upset losses – between the Storm and Cowboys. Even though Melbourne have fewer expected wins to make up compared to what we expected pre-season, their two losses to the Tigers have generated enough bonus points that Cowboys are still in second place. I guess we will have to wait another week to see if North Queensland will go to the top but long term, I would think that the Storm are more likely to finish with seventeen wins than the Cowboys are to get to fourteen.

The ISC has finally taken shape and some semblance form lines have finally gotten established. The ladder remains tight but wins to Burleigh over Mackay and Souths over Ipswich have established their credentials as the front runners. The Devils have come off the boil slightly, trading places with their North-ish brethren, after losing 29-10 in Cairns. Redcliffe are as reliable as ever and held off a Dave Taylor-carried Central Queensland. Tweed took their streak to six over the Falcons and the Tigers punished the other Seagulls for turning up to work. PNG took an exciting win over Townsville in what I think is the first ever golden point game in Queensland Cup.