I suppose if I was going to write an op-ed to open this week’s post, it should be about Cleary’s non-defection to the Panthers and what’s going to happen to Bennett at Red Hill. If I am honest, coach movements are about as interesting to me as bowel movements (or you could read Mascord’s much better take). If I can quote at length from Soccernomics, which offers this insight among many, many others:

A manager might not affect his team’s result, but after the game he’s the person who explains the result at the press conference. He is the club’s face and voice. That means he has to look good – which is why so many of them have glossy, wavy hair – and say the right things in public. The forte of most managers is not winning matches – something over which they have little control – but keeping all the interest groups in and around the clubs (players, board, fans, media, sponsors) united behind them.

With a few obvious exceptions, I’d be surprised if the NRL was much different. 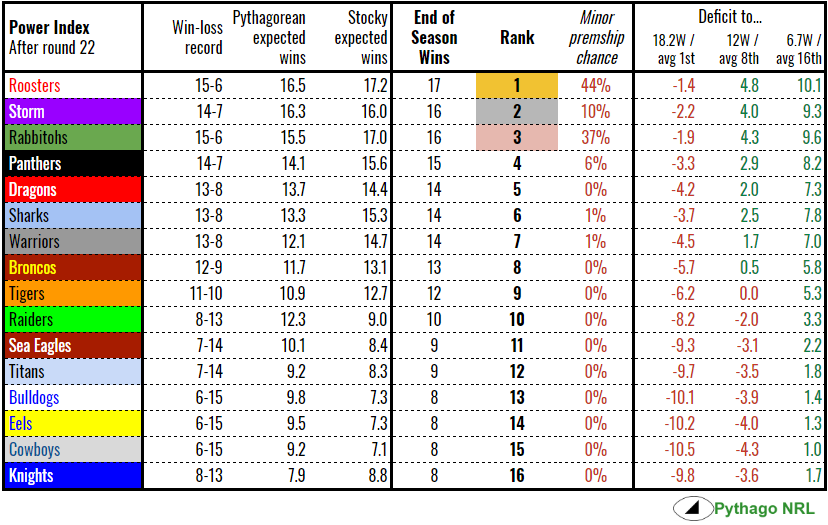 Who wants to see a Roosters minor premiership? No one? Really? Yeah, I’m not surprised and I don’t disagree, although I will point out that the Roosters’ strike rate of converting minor premierships into majors is pretty poor. Sydney won three minors in a row in 2013, 2014 and 2015 and only have one premiership to show for it. Similarly in 2004, they finished on top, albeit on points difference, but lost the grand final to the Bulldogs.

Realistically, anyone in the top four has a proper shot because skipping the elimination final is a huge advantage. Currently, the Panthers are looking good to join the triumvirate of Souths, Melbourne and City. Their main rivals seems to be from the Shire boys. That said, Penrith’s run home is tougher than the Sharks’. They have Newcastle (win), Warriors (possible win) and Storm (loss). Cronulla get the Cowboys, Knights and Bulldogs (three pretty likely wins) and the Sharks start at a one win disadvantage. It could come down to points difference, which is currently in the Panthers’ favour.

I suspect Sydney’s premiership hopes have been amplified by the fact that Souths and Melbourne currently face off in the first week. That likely forces one of them into a sudden death semi, which they are unlikely to lose but there’s a risk that they will, which necessarily makes their grand final hopes much less likely.

There’s also the fact that the Roosters are 30-odd points clear of their rivals in the ratings, which makes them look like the Storm circa two or three weeks ago. It’ll all even out a bit before we get to the finals.

Fun fact: the Dragons against the Broncos appears to be the worst finals match ups in NRL history. I couldn’t find another final featuring two sub-1500 teams. What an amazing prospect.

The Tigers have gone on an impressive run, winning four of their last five games. As a Broncos fan, with their almost equally disappointing recent form, this makes me nervous, as we perch precariously on the edge of the top eight. Expectations from my fellow Brisvegans is that the Broncos will make the finals. They have the best strike rate for this over the last twenty years out of any team in the NRL (or the AFL for that matter). It doesn’t matter much what happens after that – no one looks at this team and expects much beyond an elimination or maybe a semi final – but losing eighth spot to the Tigers would be pretty devastating for the city of Brisbane. Given that we are one of the country’s economic engines, the Tigers making their first finals series since 2011 could plunge the country into recession.

What’s going for us is that not long before the Broncos’ form fell off a cliff, they were top of the Hope Index. In fact, it was round 17, a bit over a month ago. Will Wests go over the same cliff? Of course, it’s not so much about diving off a cliff as reversion to a “true” mean and the Tigers seem to be returning to their early season form of beating the big teams. They’ve got the off-colour St George Illawarra, the mercurial Manly and potential minor premiers Souths ahead of them, which is not bad for a team that can’t beat bottom eight teams. In an unexpected bout of fairness, the Broncos have to play two of those three with the Roosters filling in for the Dragons on Brisbane’s schedule. The Broncos start with a one game advantage but I could see them easily losing three from three and before you know it, we all have to sell our children into slavery to make ends meet*.

(Weekly reminder that the finals chances are based on wins, not points difference)

The wooden spoon race is alive and well. With the bottom five getting their acts together all at the same time, we now have seven teams into contention with three games to go. The Cowboys, Eels and Bulldogs have six wins, Manly and the Gold Coast are on seven and the Knights and Raiders are on eight. It’s very unlikely that the Knights and Raiders will fall back far enough to get the spoon at this stage but Newcastle, with the league’s worst points difference, will require at least one more win to feel secure. If they go 0-3, and remember that they have by far the worst form Elo rating so this is a real possibility, they’re looking at a fourth spoon if the Sea Eagles and Titans can win at least one and the Cowboys, Eels and Bulldogs find two more wins.

It is, however, likely to come down to the ultimate spoonbowl between North Queensland and Parramatta in round 24. 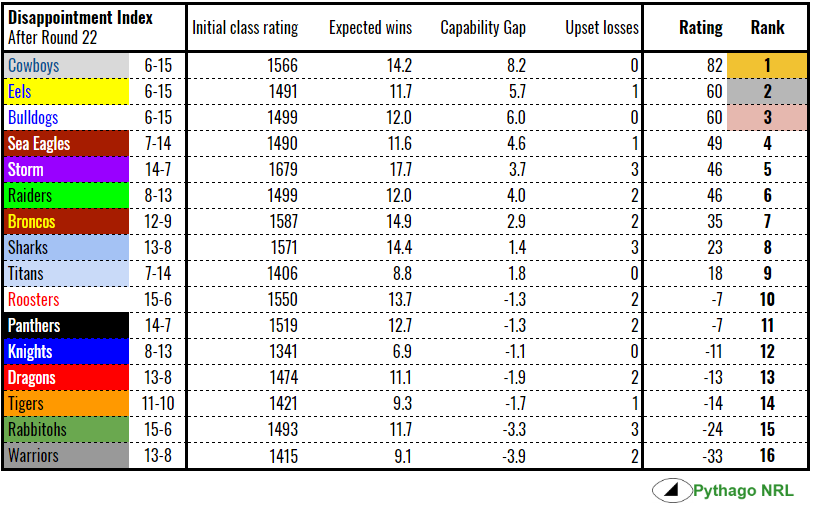 With three games left, only the Broncos, Sharks and Titans can go negative on their disappointment rating. In Brisbane’s case, it would require winning all three of their final games. Everyone from the Raiders up – including the Storm – have had a disappointing season to varying degrees. In the Cowboys’ case, they are currently eight wins short of what we could have reasonably expected.

Townsville, Redcliffe and Burleigh are now all sitting on fourteen wins and the Dolphins find themselves just ahead thanks to their draw with the Cutters two weeks ago. In terms of form lines, Redcliffe have beaten Townsville twice. The Blackhawks have beaten the Bears once this year and will face off against them next week. The Bears and the Dolphins have a win a piece from their two rendezvous this season. I think that these three will make up the prelim and grand finalists but I’m not sure what order they’ll appear in.

It’s very tight but it’s unlikely that all three will fall over with two games to go to let the Pride Steven Bradbury their way into a minor premiership, especially as the Cairns squad will need to beat Redcliffe to get there. Otherwise, the Pride seem to be reasonably safe but I question their finals longevity.

The Tigers and Hunters have worked their way into the top six with late runs. Easts are 4-1 and PNG undefeated over their last five games. They’re coming into September in red hot form. Norths and Ipswich are still theoretically possible but only one of them will come through given that they face off in the final round of the regular season. They’d also need Easts to lose to both Souths Logan and Burleigh, which is an outside chance at best (especially as PNG is not going to lose both Wynnum Manly and Central Queensland) and they won’t be able to rely on points difference.