Rating the 2019 State of Origin teams

It’s that time of the year again. The weather has just turned cold and the NRL season has built just enough momentum to be interesting and has now been brought to a screeching halt. It’s State of Origin time, the world’s only all-star game that the players actually care about. Naturally, the first question anyone needs to consider is: which team looks stronger on paper?

When it comes to assessing representative games, we don’t have access to the usual team rating tools and, even if we did, the gaps between matches and changes to the teams are so significant that Elo ratings aren’t particularly useful. This year, we can evaluate the Origin teams using Production Per Game (PPG), which is a player rating tool.

PPG is intended to be a simple number that allows for like-for-like comparisons between players to evaluate their contribution on the field. We measure production, the accumulation of stats that correlate with winning, and take this as a value over average from what we would expect the average player in that position to generate. We make some adjustments for minutes played and average that on a per game basis across the season to get the player’s season PPG.

The concept of production isn’t perfect. I’ve spent plenty of time expounding its strengths and weaknesses. In this sense, PPG is a useful analog to baseball’s batting average. It doesn’t tell the whole story but you can easily see a player that bats .260 is better than one who bats .220.

The average NRL player with at least five games has a PPG of approximately .090. The best players will be up around .190 with the worst not much above zero. We can use these player ratings to assess how productive the team will be overall, with the more productive team being favoured to win. If you follow my tipping, you will recognise this as the xPPG system.

Through the first eleven rounds of 2019, here’s how both sides stack up: 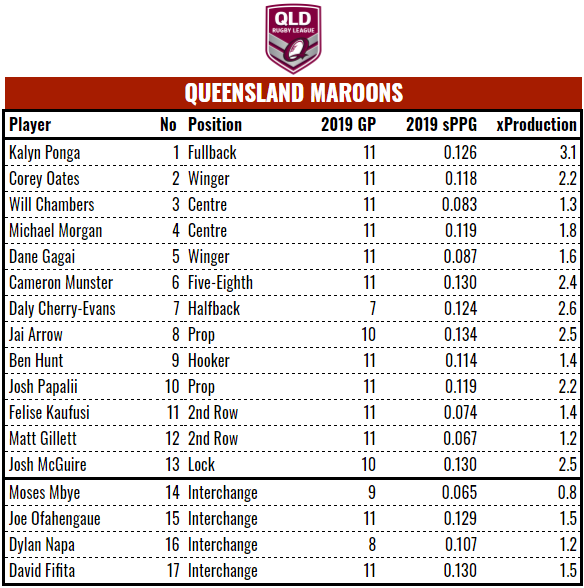 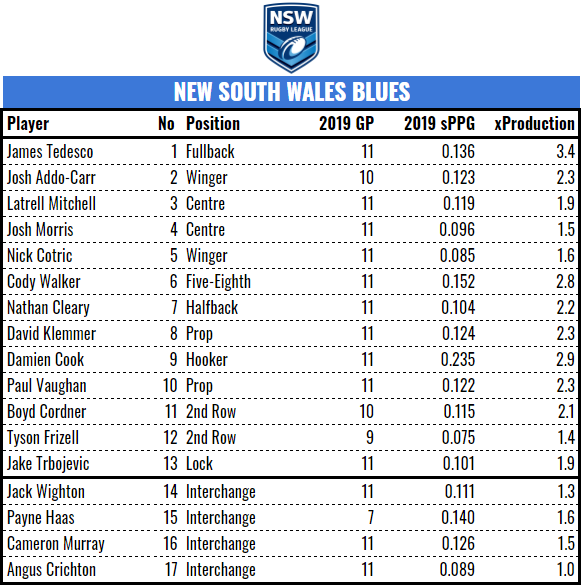 In stark contrast to last year, where the Blues’ superior pack was obvious before the first hit-up, the teams are very well matched by the production we expect out of these players.

While NSW has the edge in each of the team components we’ve examined, the gaps are within the margin of error outside of the spine.

The key for a Maroons victory – and this will surprise no one – will be shutting down Damien Cook. If they can do it, then Queensland has enough to match it with the New South Wales line up on every other part of the park. Home ground advantage will then come into play and the advantage will swing to the Maroons if Cook can be taken out of the equation.

If you’ve watched five minutes of Souths play this or last year, you’ll know that Damien Cook is a former beach sprinting champion. That completely irrelevant piece of trivia aside, Cook has acceleration, the ability to pass and has now added kicking to his arsenal. That gives his side significant options coming out of dummy half. More significantly, he has the capability to identify the right play to make.

Damien Cook is not invincible though and he can be smothered out of the game. If I was Kevin Walters, I’d be watching last year’s Souths-Brisbane games on repeat. The Broncos were the only team to beat the Rabbitohs twice and they held Cook to .068 in round 8 and .098 in round 22. The pressure that would normally be reserved for the halfback – whose only weapon is a high midfield bomb – needs to be applied to the hooker.

How could numbers improve the teams?

Let’s accept up front that “improve” is going to be used fairly loosely here. Realistically, one or two selections aside, the teams are as good as possible given the players available. The analysis doesn’t consider the intangibles that selectors love – experience, cohesion and marketability – as well as unquantified tangibles, like dealing with Latrell Mitchell if he deigns to turn up. But there’s two obvious positions that have not been optimised.

There was plenty of speculation around the Blues’ 7. There is definitely a case that Mitchell Pearce should be it. His season PPG so far is .160, fourth best in the NRL, and he has averaged .221 over the last six games. That is some serious form. Pearce is also experienced, with 264 first grade games under his belt and eighteen previous appearances for New South Wales. He ticks all the boxes.

Of course, Pearce came away from those games with only five wins and no series victories, so I can see why Brad Fittler might be reluctant to select him.

That said, Nathan Cleary isn’t playing to his best (.118 in 2017 compared to .104 in 2019), let alone what I would have expected an Origin calibre half to be generating. Here’s an abbreviated list of NSW eligible halves with a superior PPG this year:

Against that list, I think it’s striking that fullback-turned-five-eighth-now-utility Jack Wighton (.111) and Nathan Cleary get caps while Roberts, Reynolds and Brooks stay home.

On the Queensland side, Moses Mbye and Ben Hunt playing in a rotating hooking role is, on the face of it, not a great choice. The question is: who would you put in their place?

Jake Granville sits on .100, admittedly playing himself into some form over the last month, averaging .160 when he’s started at hooker. Realistically, he was probably the only real alternative.

Andrew McCullough (.074) is injured and his replacements at the Broncos, Jake Turpin and James Segeyaro, are not experienced enough in Turpin’s case and barely played any first grade in Segeyaro’s case. It’s also likely Segeyaro’s minor DUI would rule him out of the squad, even if he had been selected. That said, a Granville-Segeyaro rotation might have been an interesting roll of the dice.

Reed Mahoney (.074), Kurt Baptiste (.029), the injured Jake Friend (.120) and the retired Cameron Smith (.116) appear to be the only other Maroon-eligible options that have started at hooker this year. Walters seems to be making the best of a bad situation.