It’s taken a while longer than I thought to get this going but here we are with the first post projecting the future of the 2017 season. The projections will be updated after each round on Monday.

Pythagoras and the Stocky are starting to align pretty well now. We see Melbourne have made 18.1 wins in the Stocky, the long term average number for the minor premier, meaning I can now dispense with the MAMP. It took until round 8 last year but if the Storm slip up this weekend, we may see MAMP make a comeback.

Manly’s Stocky projection is probably underselling them a bit. Pythagoras has them rated much more highly. North Queensland and Brisbane are looking like they’ll be in a fight to secure the last finals berth. St George Illawarra and Wests are looking a little under-rated and over-rated by the Stocky respectively.

The Storm remain on top of the Collated Ladder, extending from 18 to 19 wins after their demolition of the Panthers. The Dragons, Roosters and Sea Eagles have moved to occupy the next three spots and are shaping up as the next tier of contenders. The Broncos and the Eels are slipping down the table and out of the top 8 after their losses, making room for the Sea Eagles and Cowboys.

With the Roosters and Panthers stumbling and the Dragons playing catch-up, the Storm have moved into outright favourites for the Minor Premiership, more than twice as likely as their nearest rivals to take the title.

Meanwhile, the struggling Tigers are almost a certainty at this point to take the Wooden Spoon. With the Titans and Knights thereabouts, if not actually winning, it’s going to uphill for the Tigers all the way. 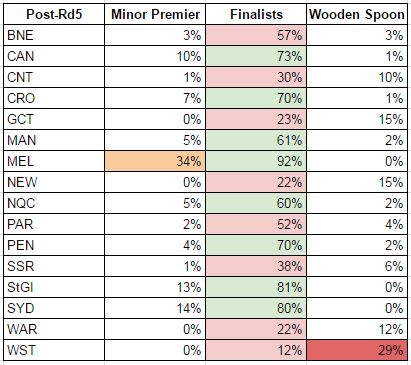 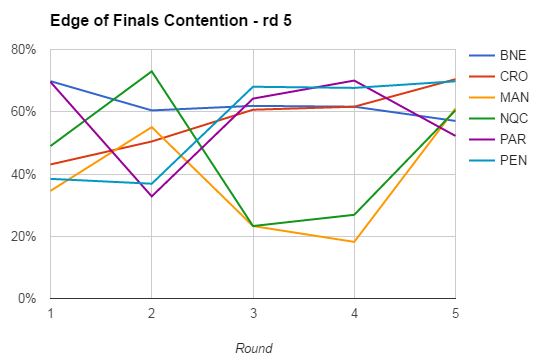