A couple of really, really big upsets in this week’s mix with the Sharks bringing the Storm’s unbeaten run to an end and the Tigers throwing the form guide out the window and taking down a lacklustre Cowboys outfit. The Dragons now top the table, matching the Storm’s 5-1 record. It’s very tight still with 3-3 teams covering every position from sixth down to eleventh. As a result, it’s the Titans and the Knights, with one win apiece, looking the most troubled.

Here’s a fun fact: only Brisbane and New Zealand managed home wins. Everyone else was schooled by the visitors. Also, you don’t see an 11-2 scoreline very often.

There’s not a lot between the two systems this week. Manly are perhaps a bit under-rated by the Stocky. I almost think that the system has it in for the Sea Eagles. I would still expect them to make the finals with a degree of comfort.

The Tigers on the other hand have been overrated by the Stocky. Going from 6.5 to 9.5 wins seems to be a bit of a stretch based on one, let’s admit it, fairly flukey win over the Cowboys. They will need to turn in some repeat performances and get their for-and-against up if they are to actually move up the ladder. The Knights and the Titans still more likely to sneak wins but we will wait and see.

Despite the Storm stumbling, we don’t need to bring MAMP back because the Dragons are now projected by the Stocky to take 18.0 wins and now move into the lead of the Collated Ladder. Melbourne have dropped two wins to 17 and second place.

Being early in the season, there’s still a lot of movement based on the most recent results. Brisbane and Cronulla are now safely ensconced in finals positions while the Cowboys are now on par with the Warriors and Eels, which is a bit unfair. We’ll have to see how Thurston goes. Sydney has slipped down but this might be a little more reflective of their actual form. 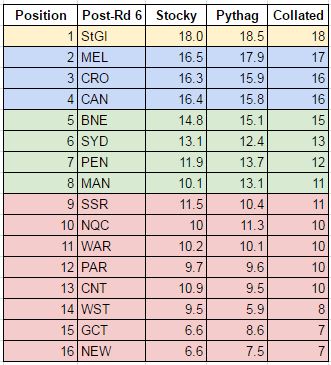 St George Illawarra have taken a massive step towards the minor premiership, tripling their chances over the weekend, while Melbourne’s have halved. We seem to be eliminating contenders and their chances are now flowing towards the more likely winners, including Canberra and Cronulla. The Roosters and the Broncos are outside chances but we must remember that the Storm were only rated 4% at round 8 last year.

The Tigers have left behind the Titans and the Knights who are now equal favourites – either of those taking the Wooden Spoon is now more likely than not – slashing their Wooden Spoon odds with a single win. 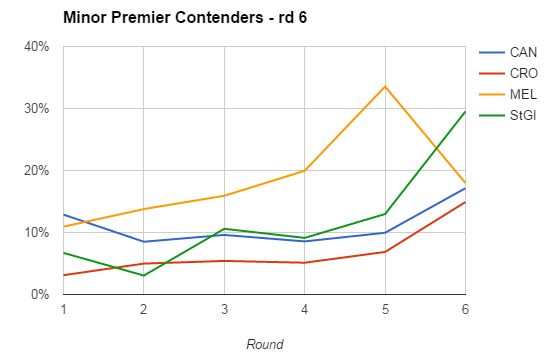 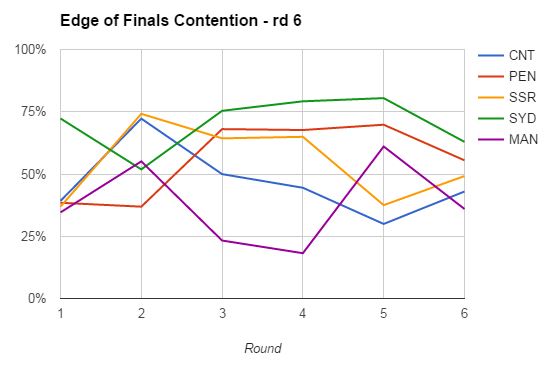 How do you figure?

How does this differ from the NRL ratings?

What are the Indices?

How do you rate the players?