Analysis – Where to for NRL expansion according to Cap

When I first started getting elbow-deep into NRL numbers, one of my favourite things to think about was expansion. The NRL has had the same sixteen club format since 2007. The Gold Coast Titans were the first new team to be added to the competition since 1998 brought us the Melbourne Storm.

The idea of some fresh faces and new colour schemes, coupled with a positive sign that the game is growing and the inherent riskiness appeals to many of sport’s more ardent fans. Todd Greenberg, CEO of the NRL, recently fielded questions from Twitter users, a noticeable portion of which were about expansion (which he hosed down).

One of the main drivers for examining the concept of Cap (see 1, 2 and 3) has been this. If we consider attendance a proxy for popularity and financial stability (let’s admit that’s dubious but press on nonetheless), then Cap can tell us something about potential expansion opportunities.

Cap is not so accurate to make the individual number is meaningful but you can break combinations of sports in cities into categories of popularity:

We’re going to go off-the-fairly-rigorous-piste we’ve been on until now but the idea is that if you can roughly estimate a sport’s popularity in a given city, using a qualitative analysis like the above, you can get an idea of an expansion team’s attendance might be.

Most NRL teams average around 15,000 per home game. In lieu of knowing more detail about break-evens (which 15,000 probably isn’t enough given most rugby league teams lose money) and ignoring the TV angle, let’s use that as a guide for some expansion test cases:

Presently, there are no NRL teams in WA, SA or Tasmania, which have been more or less conceded by rugby league to the AFL after the Perth Reds and Adelaide Rams were wound up in the late 1990s.

With the Western Force teetering on the verge of oblivion (at time of writing), there’s a rectangular stadium up for grabs during the next Perth winter. We have two Cap datapoints to look at: the relative popularity of Super Rugby compared to NRL in a non-rugby market and the relative popularity of AFL in a non-AFL metro market. That would obviously be us taking a look at Melbourne and Brisbane respectively.

Melbourne’s Rebels have a Cap of about 66, putting them firmly in the “no one cares” category. The Storm have a long run Cap that averages around 27, not great but still better. Roughly speaking, the NRL’s popularity is about 2.5 times that of Super Rugby in Melbourne. Given Perth’s Force gets a Cap of 30, that would suggest a NRL team’s Cap at about 12. Meanwhile, the Brisbane’s Lions/Bears franchise has managed to average a Cap of around 9 over the good times and the bad in a nominally rugby league market.

We can probably assume that a NRL team would sit in the Outlier category if brought to Perth. With a Cap starting at 12 and then going down to 9 with some success and time, would see average attendances starting around 14,000 and improving to 19,000 with a decade of stability and some finals success.

Brisbane is the obvious place to plonk down a new team. The Broncos have a market of about 3 million people to themselves and, unlike in Victoria, Queenslanders actually care about rugby league but not everyone loves the Broncs.

As we examined last time, the AFL is a good guide for what happens when expansion occurs in a major metro market. When a second WA and SA team was added in 1995 and 1997 respectively, the Cap in Perth and Adelaide decreased by about one-third. In Brisbane, where the existing Cap is 5.8, this would mean dropping it to 3.8. 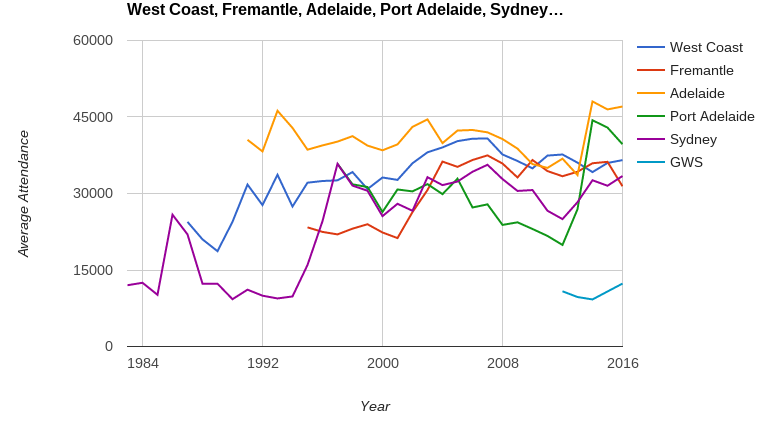 But what we see if that the new team’s attendance trails for some years and then, pop, it jumps up to match the older team’s. Freo’s attendance popped up to the Eagles’ in the mid-2000s and Port’s popped up to the Crows’ a few years ago. Without doing the research, I would guess that stadiums are responsible for the pop sound effect but presumably GWS can look forward to the same circa mid-2020s.

Average attendances for the two Brisbane teams would be in the ballpark of 24,000 per game. The Broncos would be likely to maintain 30,000 to 33,000 attendances, meaning the new Brisbane team would have to make do with 12,000 to 15,000 attendances for about the first decade and then, pop, we’d be looking at both teams averaging 25,000 to 35,000 per game. As a bonus, the Brisbane clash would make the Broncos v Cowboys clash look like kids’ stuff by comparison.

This is obviously a pretty rickety analysis, built on a very lightweight scaffold and a metric load of assumptions about the interchangeability of sports’ popularity, but I think this is better than blindly conjecturing. If you were actually planning on stumping up money, you would want to be just a bit more rigorous in your feasibility study.