The NRL machine continues to chug along, churning out mysterious results that don’t align at all with the previous week. That is, unless you are Canterbury or Souths, in which case, you’ve made your bed and 2018 will see you lie in it. The Tigers are proving that not only do coaches matter but on-paper team strength doesn’t count for a lot when you can dominate possession. I never thought I’d ever have Luke Brooks photo on this website but the dude deserves it. Finally, Parramatta lost by more than fifty, which is just so good, and the Raiders endured another close loss, which is not.

The ladder doesn’t tell the whole story. Sometimes, we can see other things – like hope, luck and disappointment – in the league. That’s what why we have the Indices.

Don’t get what you’re looking at? See the primer 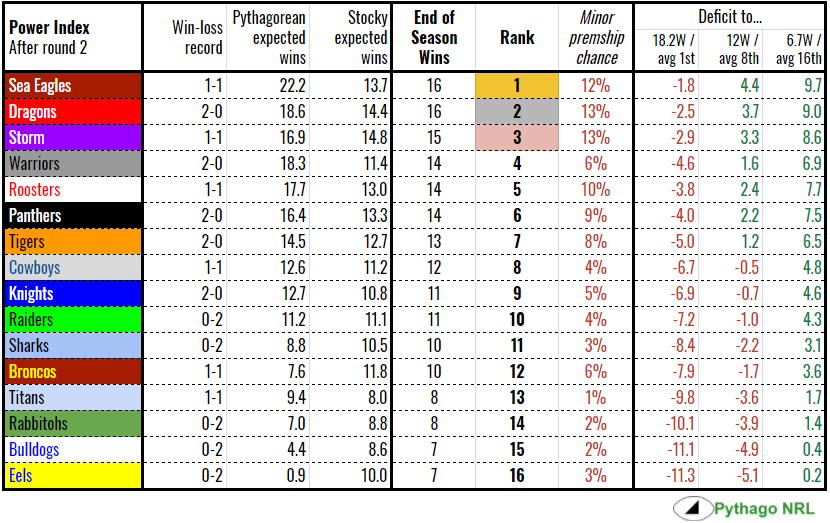 The Sea Eagles gave the Eels an absolute belting over the weekend and, as a result, Manly’s Pythag is sky high while Parra’s plumbs the depths, expecting less than one win. They’re now top and tails of our power index, although if Manly manage to win the minor premiership with only sixteen wins, I’ll eat a hat. I own some nice hats so it would be an expensive and painful exercise.

A lot of the 2-0 teams – Penrith, Newcastle, Wests – are sitting mid-table. Their Elo ratings are still comparatively lower, so they don’t get much love out of the Stocky. The Stocky still only has Newcastle at a 1-in-20 chance of the minor premiership, which is basically nothing or less than if you assigned the minor premiership at random. Still, other than the Broncos, things are already looking bad for the bottom six. 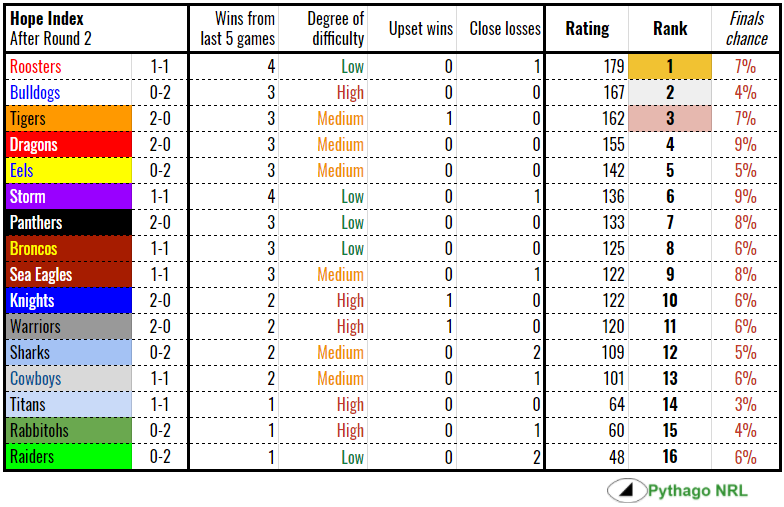 Sydney don’t traditionally need a lot of hope being, by a significant margin, the most successful club in Sydney over the last decade. The Bulldogs are still riding the end of last season but if they don’t start winning games this year, that will disappear quite quickly.  Ditto the Eels. The Cowboys, Warriors and Titans are suffering the opposite: last year’s terrible run to the finish is holding them back.

This should all sort itself after round 5, when the results reflect this year alone.

Everyone is still in negative ratings, so it’s not panic stations yet but the season is starting to take shape. If either the Doggies or the Bunnies or both go 0-5, it will definitely be panic stations as they will need more wins than they can expect based on their current form. Eels, Titans, Sharks and Raiders will start worrying the round after.

If I were a betting man, the Bulldogs have little to hang their hat on from the first two games and would be more likely for mine to have a winless first five games. Stocky has them pegged at 13% for a wooden spoon. My personal view – not at all backed up by some special, scientific insight – is that anything at $8 and over for that is not looking too bad. Sportsbet has them at $5.50, or about 18%, but they also have the Tigers at $5. Seven wins should see you avoid the wooden spoon and Wests are already two-sevenths of the way there. I have them at a measly 3%. 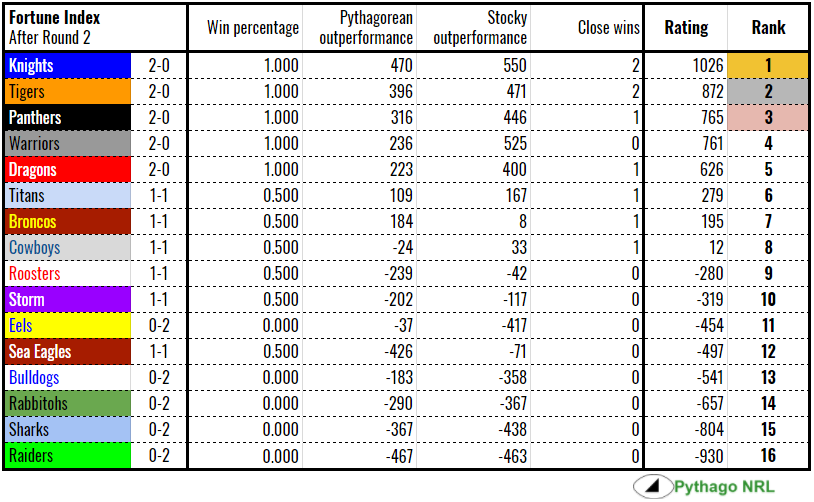 Both the Knights and Tigers, with a +3 and +4 for-and-against respectively, have percentages way in excess of what we would expect from their near 0.500 Pythagorean expectation. They are still comparatively under-rated and it will take a while for Archimedes and the Stocky to take them seriously.

Unsurprisingly, the Raiders’ complete inability to win a game, despite coming close so often, sees them at the bottom of the Fortune Index. I would say it’s bad luck but we see it almost every other week, so how long before we decide that Canberra just flat out suck but not so much that they ever get hammered?

The order remains the same as last week. The Knights are a scant five wins away from being officially not disappointing. The season’s other surprise packets – the Tigers and Warriors – need another seven. At the top, the Broncos have snuck under the Sharks with their win over the Cowboys. The Raiders, Rabbitohs, Bulldogs and Eels are all 0-2 and still need the first of the twelve wins required for their seasons to look respectable.

The Jets put in a claim for being a contender this season by skipping out to an early lead and holding off a fast-finishing Blackhawks in Ipswich. The Magpies did likewise, having won the game by halftime. Burleigh and Norths both went 2-0 over the Dolphins and Capras respectively. The Pride upset the Hunters at home while the Tigers and Falcons finally got their campaigns underway with tight wins.