I think Donald Horne said, “Rugby league is a dumb game, run by people who share its dumbness.” *

Let’s remember that refereeing is really hard. Running ten kilometres of sprints is hard. Officiating a rugby league game is hard. Trying to do both at the same time is extremely difficult and not something most people could actually do (miss me with “they get paid well”; refs are paid far less than players and media talking heads). Adding a teleconference with the Bunker on top of that is beyond human capability.

Let’s also remember that the referees and the Bunker get things pretty right almost all of the time. The officials are certainly a load more accurate than commentators or punters who get to watch it repeatedly in slow motion without the running. And I think the Bunker is a lot better than most sports’ review systems. Try watching a baseball review sometime.

The way the rules are written do not help. The incidents in both the Raiders-Sharks and Titans-Roosters games, the actual rules were ostensibly followed but, here’s the thing, the rules are sometimes dumb as shit and prone to dumb as shit interpretations. I like that I walked away from rugby league for over a decade but one thing that stayed true was the overly complicated rule tweaks at the start of every season that usually went against what most people understood the game to be.

But in a season where

it doesn’t take a genius to see that there’s something wrong with the game at a level far more fundamental than the individuals making the errors.

Any disaster requires multiple things to go wrong, the prevention of any would prevent or mitigate the disaster, and we saw it writ large on Friday night at Shark Park. A succession of failures led to a controversial – to put it mildly – decision which may have decided the match. This is antithetical to what the sport stands for.

As Phil Gould likes to say, it’s not the referees but it’s the way they’re managed. Well Phil, you should elaborate on that a little more (because it seems like you know the whole story and I’ll wager a couple of Daily Tele journos are waiting for a convenient time to blow the lid for clicks) and I reckon it goes deeper than that. You don’t get that many egregious errors in six months without a high level of incompetence. The signs have been there but we’ve been ignoring the near misses as isolated incidents that I don’t think they are.

So what grates are not the errors, but that the NRL does not appear to use a systematic and transparent way of preventing future disasters. Someone might own up to a mistake and apologise. There might be an investigation. But the results of the investigation are never followed up and the error-prone official is dropped for a couple of weeks before making a quiet return when it’s all blown over.

Shit will always happen but there’s never any real preventative measures taken to avoid future shit. It’s always just papering over the cracks. Quality control should not be this difficult for a multi-billion dollar sport.

Diatribe aside, we’ve seen a big shift in the power narrative this week. The Tigers have beaten pretty much all of the top teams at one point or another, so it was perhaps less than surprising to see them roll over Souths. Wests’ problem has been beating spoonbowlers in 2018. The result is a big drop off in the Bunnies’ perceived chances, falling from ‘premier apparent’ back to mere ‘contender’. Realistically, there’s only five teams in the running for the minor premiership now: Melbourne, Sydney, Souths, St George Illawarra and Cronulla.

That drop-off is reflected in this week’s Finals Stocky, which has Sydney as the most likely premier. Sportsbet have them at $4.50, which isn’t too far off what the Stocky has forecast. In fact, the top four are all pretty close to market prices, with the Dragons at $7 to win the grand final as notably bad value. That said, the Rabbitohs were roughly 30% last week, now down to 18%, but I expect a rebound in the near future. If the Sharks can jump the Dragons into the top four, that changes the permutations considerably because that first week of finals is a real trap.

Around this time last year, we had the Cowboys as dark horses to make the grand final. It came to pass but I’m sure I walked back from that prediction in the final six weeks, as North Queensland looked extremely unlikely to even make the finals. The most likely grand final combo is Storm versus Roosters at about evens.

For Penrith, New Zealand or Brisbane to win a premiership from their current position is going to require some extremely good luck. They are currently less likely potential premiers than Wests were in 2005 and about the same as the Sharks in 2016.

The Stocky has gone a bit whack again and is forecasting nine finalists. The Tigers are now more than likely to make the finals but that’s more reflective of, the Tigers are likely to finish with enough wins to make the finals but whether they do or not will come down to points difference. Now that the Broncos have handed a big loss out to the Panthers, the top eight are now all positive (the Warriors and Brisbane only just), while Wests are -33. Bit of work to do if they are to realistically challenge for that final playoff slot.

The Panthers have slumped to one win from five and now bottomed out in sixteenth place on the Hope Index, down there with the hopeless spoonbowlers. They’ll still make the finals but one would think are on track to be bundled out in straight sets in the first week. Souths, Easts, Brisbane and Melbourne have all had good runs of late and won’t have particularly difficult runs into the finish. 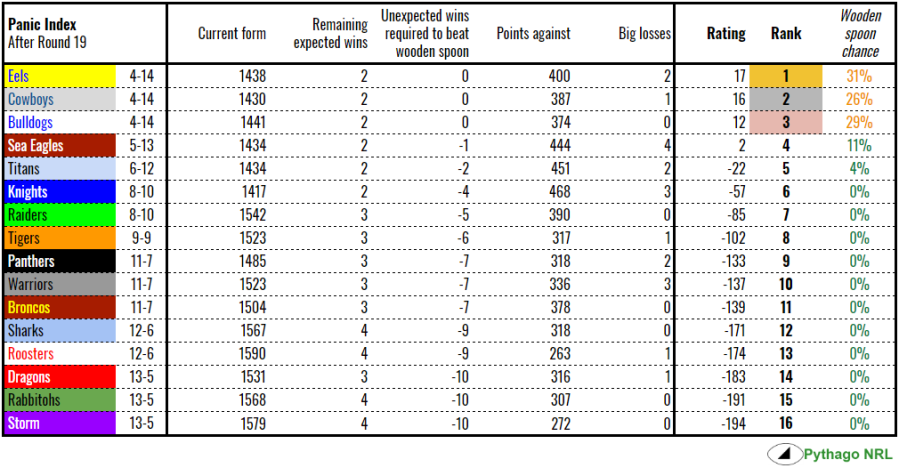 Hear that? That sound is a warning siren, alerting all and sundry that the wooden spoon race remains alive and well. Parramatta’s win over Canterbury and North Queensland’s loss to St George Illawarra means the bottom three are equal on four wins. Manly is just off the pace with five. All of them have a positive panic rating, the Eels just edging the Cowboys in the rankings on big losses. It’s become a fairly embarrassing spectacle at the bottom of the ladder, a far cry from 2015 when the Knights won eight games and still got the spoon.

The rest of the league? Chillin’. With the far outside exception of the Titans, no one is at risk of taking the wooden spoon.

The Knights and the Broncos have had fairly similar seasons. Both have won seven close games, that is by six or less. Brisbane have the advantage of winning another four games on top of that to Newcastle’s one. The Stocky outperformance is providing very little contribution now that form ratings are reasonably well dialled in, so it’s a matter of taking the opportunities close games provide to get to the top of the index (or not, per Canberra, and finishing at the bottom).

I think, even if the Cowboys don’t send Thurston out with a spoon, they’ve got the Disappointment Index well and truly wrapped up. They started the season with the fourth highest class rating on 1566. As of last weekend, they have dropped below 1500 to 1497 and are officially a class C team. Then again, last year’s most disappointing team was South Sydney and they’re well in the hunt this year.

Meanwhile, on a side note, the Sharks have just edged the Broncos to become the second best team by class in the league. The Titans are on 1400-even and technically are a class E (down from D earlier in the year) team, joining the Knights. Congratulations one and all.

The minor premiership triumvirate all took wins on the weekend. The most impressive belonged to Townsville, who annihilated Tweed Heads and pretty much ended their season. While I got excited about the run the Seagulls made when Elgey was dropped to reserve grade, it appears the wheels have come off and they have reverted to their early season form that saw them drop the first five in a row. Given their fairly ordinary first half to the year, the Tigers have come roaring back in to form (now third best by Euclid, ahead of Burleigh) and gave the Dolphins a real scare. If you’d asked me four weeks ago what the margin would be, I would’ve given you 6-18, not 2. Burleigh had a straightforward game against the Capras to take the win and stay in the hunt.

I think Norths and Souths are both cooked. The Devils went down to the Hunters in front of a massive crowd in Lae while Wynnum-Manly comprehensively outplayed Souths Logan in Normanton. Easts are an outside chance of snaking their finals spot if the form lines continue as they have for the last few weeks. The Tigers play both before the end of the year which could resolve that neatly.