After a dominating win over Great Britain, followed by a tough and exciting win over Australia, some extremely exuberant pundits decided that Tonga were the best nation in the world and worthy of Tier 1 status.

Putting aside the fact that a poor island nation of 100,000 is not capable of generating enough native talent to compete with Australia or England and so not at all suitable for Tier 1 status, I find it hard to believe that two wins is enough to reach the top of the rugby league pile. Then the IRL updated their rankings and put New Zealand at number one. It all got too much for me.

Fortunately, the draw for the 2021 World Cup restored some sanity, despite the slightly incongruous setting of Buckingham Palace and newsworthy presence of the Duke of Sussex. With 641 days to kickoff, I got a bit excited and looked at next year’s tournament.

A few years ago I created an Elo rating system for internationals. I haven’t used it for much, other than a bit of trivia and as a replacement for the occasionally very baffling IRL world rankings. New Zealand’s number one could in no way be supported by results on the field, other than the Kiwis have played more games than the Kangaroos recently.

I updated the ratings every six months or so, given the slow rate of international games, but made some revisions for the current rankings. The basics are:

In terms of accuracy, the PWR has an approximately 75% strike rate. This sounds impressive until you consider an algorithm that always tips Australia, then England, then New Zealand and then the home team would probably have similar results. 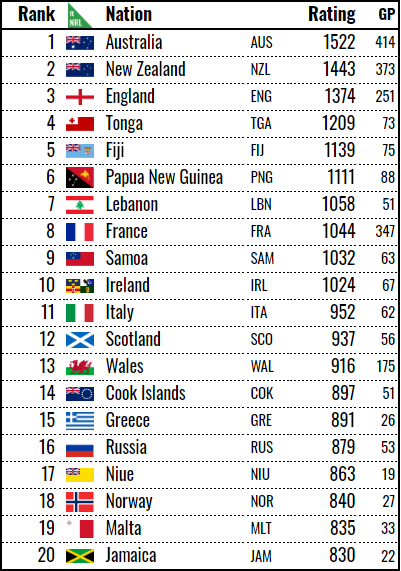 2021 sees us with the second-ever World Cup with sixteen teams, and likely the first with sixteen countries, as the 2000 World Cup featured a Maori side. The sixteen nations have been split into four groups, after the impressive draw held at Buckingham Palace last week.

To get a feel for what the draw means and how the relative strength of the nations currently stacks up, I ran 50,000 Monte Carlo simulations of the 2021 World Cup and present the findings for your consumption. 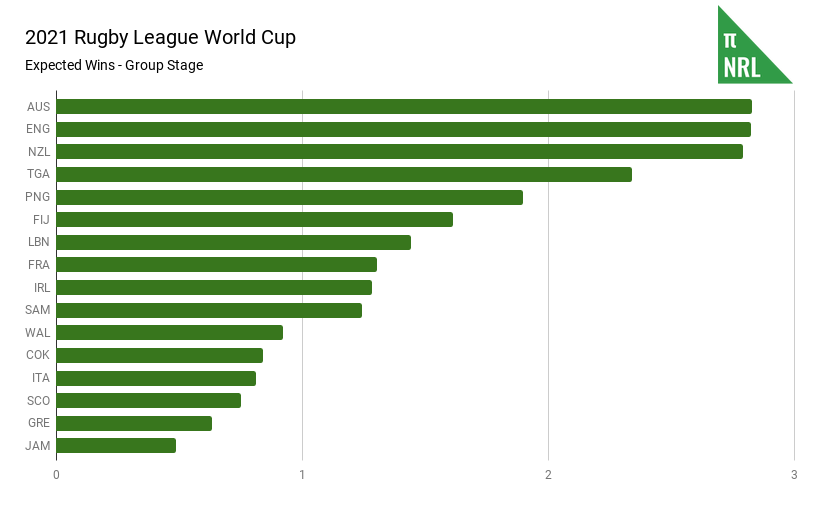 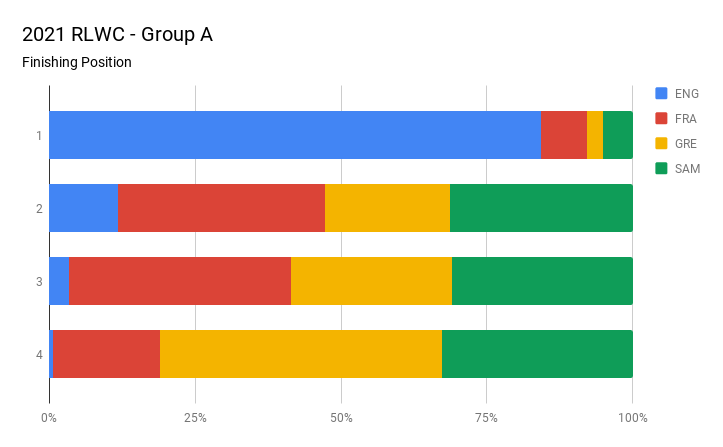 The seeding system has handed an easy draw for the big three and England is no exception. The hosts are an 84% chance of qualifying for the finals out of the group stage and only slightly less likely to do it undefeated through the group stage.

France and their Pacific equivalent, Samoa, will be fighting for second place. The ratings currently favour the Chanticleers, who are a 44% chance of qualifying for the finals, over Toa Samoa at 38%. Samoa should be able to put together a NRL quality 1-to-17, while France will draw on homegrown players, many of who are professionals in the RFL and FFR systems, which on paper might seem weaker. Samoa are having a tough time despite their nominal strength, currently 1-6-1 since the start of 2017. It may not be apparent which team is better placed to qualify until closer to kick off.

While the Greeks are almost an afterthought, making their World Cup debut after an extremely difficult few years at home, they are relying on a double choke from their more fancied rivals if they are to progress. Their heritage players will not likely be a match for the professionals of the other three nations. 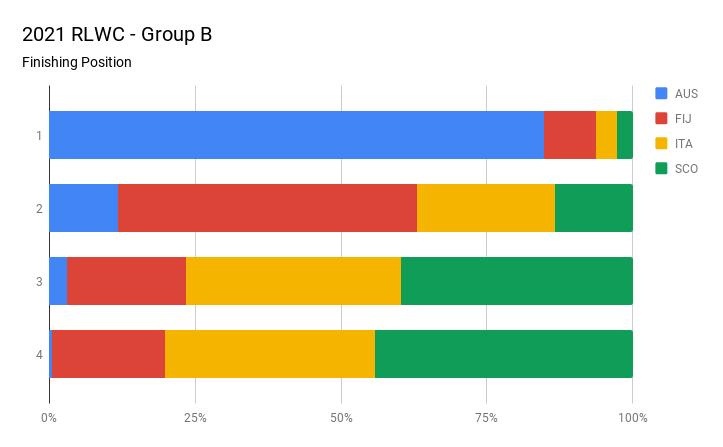 Australia have a 16.3% chance of losing one or more games, implying that the Kangaroos have an 83.6% chance of progressing into the quarter finals undefeated. I wouldn’t care to speculate what kind of scores will be run up on the way. The odds of Australia going out in straight sets is roughly on par with Jamaica winning the tournament.

The Bati will almost certainly slot in to second place. Fiji are a 60% shot at qualifying for the finals but only a 6% chance of gaining admission undefeated. If they did manage a win, considering Fiji’s history against Australia (they have scored a total of 16 points in six World Cup meetings), it would be something to witness.

It is not really worth discussing Italy or Scotland. It’s not impossible for them to do something but this really is the Group of Death. 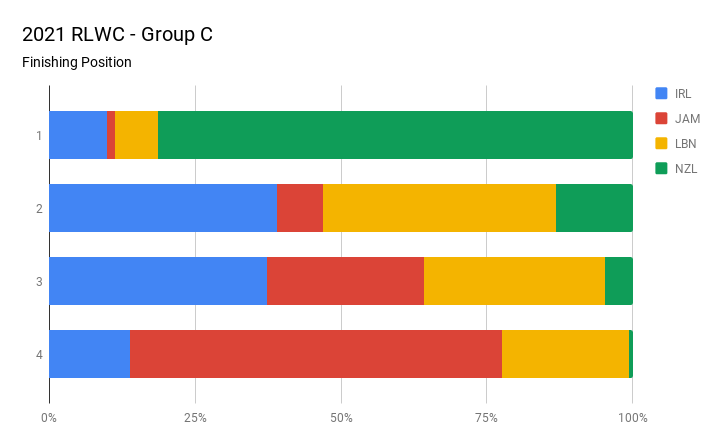 Group C is a genuinely interesting prospect. While New Zealand would be expected to pass through more or less untouched, the 2008 champions did struggle last time out. I would be surprised to see a repeat and it is far more likely that the Kiwis will dominate in a similar fashion to Australia and England.

The more interesting match-up is whether Ireland or Lebanon will make it through. The Wolfhounds would look to make their first finals appearance since a 26-16 loss to England in the 2000 quarter finals. Whether Lebanon can repeat their performance of 2017 will largely hinge on what heritage players are available. Mitchell Moses is more likely to suit up for Australia and Robbie Farah has ridden off in to the sunset, leaving the Cedars bereft of first grade talent. Ireland nominally have the edge with a 48.6% chance of qualifying to Lebanon’s 47.2%.

While Jamaica have managed to unseat the US-Canadian duopoly on football in the Americas, their relatively unknown heritage players, their short history and a resume predominantly devoid of games against top nations makes the Reggae Warriors difficult to judge. It is very likely that the debutantes will leave England without a win. 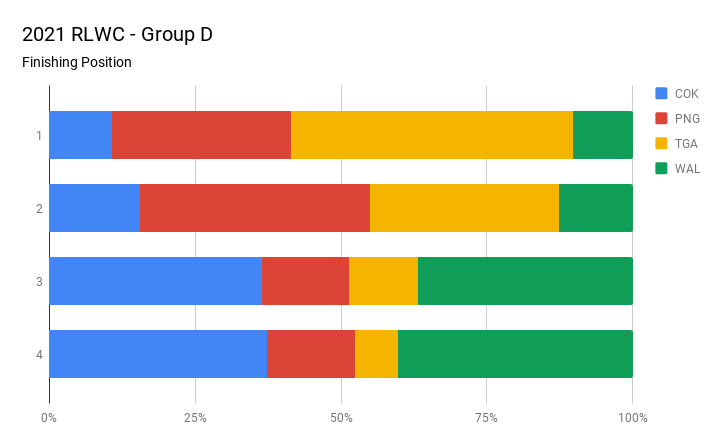 Described as the “Group of Death” by journalists and fans seemingly unaware of what that actually means – perhaps because it’s the first time something like this has emerged from a Rugby League World Cup – Group D is actually the most open. Tonga area by far the weakest of the top seeds, so the other nations have the best chance of causing an upset.

The Kumuls, after the four top seeds, have the highest expected group stage wins in the tournament at 1.9. PNG are the team best placed to displace the top seed in their group at 30%. Outside of Group D, your best bets are Ireland, then Fiji and France, each at less than 10%.

The weakest team in this group, the Kukis of the Cook Islands, have a better shot than their lowly equivalents – Greece, Italy and Jamaica – do in the other groups. If anything, Group D is the “Group of Life”.

The top two teams in each group will progress to the quarter finals.

The full draw is a few months away from being released, so I have to speculate about the format for the finals. I’ve assumed A1 v B2, B1 v A2, C1 v D2, D1 v C2 for the quarters and QF1 v QF4 and QF2 v QF3 for the semis. If the World Cup organisers opt for something different, that might change the pathways the top seeds have to take to the final, which might affect their chances. Nonetheless, it’s difficult to imagine the tournament unfolding in a way that the seemingly inevitable doesn’t occur. 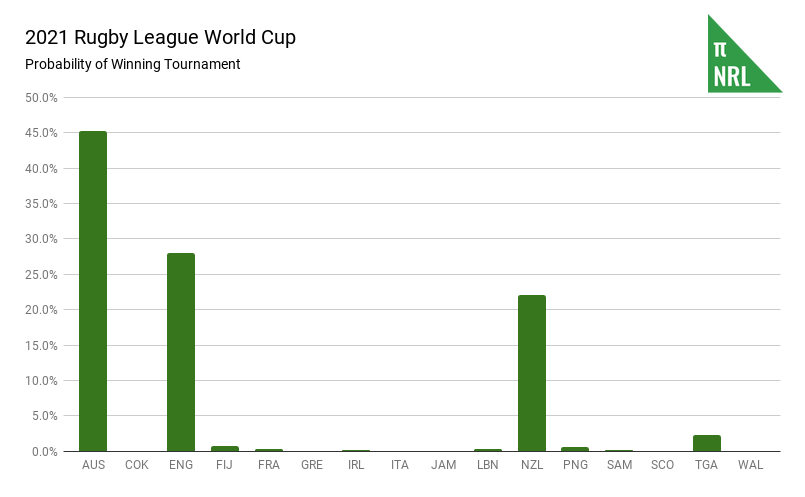 Australia are the tournament favourites. This is no surprise to anyone. It’s difficult to overstate just how dominant Australia are at rugby league but the gap to the rest of the world has halved since the early 2000s and a third of what it was in the early 1980s. New Zealand, despite being the second ranked team and first ranked if you listen to the IRL, slips to third favourite. By 2021, it will nearly be a half century since the World Cup was won by anyone other than these two nations.

The home ground advantage afforded to England pushes them into second-most likely, slightly better than one-in-four of winning their first World Cup since 1972, when Great Britain drew the final in Lyon 10-10 with Australia and were awarded the Cup due to a superior performance during the group stages.

Tonga, despite beating Australia and Great Britain in 2019, are currently well off the pace. It’s not impossible – the Catalan Dragons won the Challenge Cup from a similar position in 2018 – but perhaps more unlikely than most would expect. Mate Ma’a Tonga’s rise has been documented to the point of cliche. In 2016, they averaged a rating of 1012 and now sit on 1209. The next two years could see their rating improve still more and consequently, their odds of winning the tournament, as calculated here, would improve. On the other hand, there’s only about a one in five chance of seeing the top four seeds all in the semi finals and if someone is going to miss out, it would likely be Tonga.

At the other end of the scale, the eight least likely teams are the Cook Islands, Greece, Ireland, Italy, Jamaica, Samoa, Scotland and Wales. In 50,000 simulations, they won a total of 245 simulated World Cups, or about 0.5%. While there is a chance one of these eight teams might well win in 2021, it is extremely unlikely that we will see a fairy tale. At least, one of that scale. Fiji (0.8%) and PNG (0.6%) would be more likely winners, and still fairy tales, there’s a ways to go before the tournament is truly competitive.

Still, between now and kick off on 23 October 2021 in Newcastle, a lot can happen.