A Complete History of Super League

To complement the complete histories of the NRL and the Queensland Cup, I humbly present the complete history of the northern hemisphere Super League competition. I will also, at no charge to you, include abbreviated histories of the Championship (from 2007) and League 1 (from 2009). I would go further back but the official rugby league website does not have results back that far.

This being a website that predominantly deals in statistics, I don’t intend to describe the history in words but rather in graphs. Specifically, I will use Elo ratings to chart the paths of each club.

I do two types of Elo ratings. Form is about the short term performance of clubs, and can represent anywhere from four to eight weeks of results (calculated on the points margin of each game) depending on the draw and league, while class is about long term performance, and can represent the average of years of performance, aggregating wins and losses with small rating changes. Form is a better predictor of match results, class is a better predictor of fan disappointment.

Normally, I treat each league as a self-contained entity, which operates with an average rating of 1500. For the RFL pyramid, I took a different tack and created one class rating system to span the Challenge Cup and the three leagues. The Challenge Cup rounds and finals are weighted the same as their league equivalents and teams carry their rating through promotion and relegation between the leagues. Super League teams start with a 1600 rating, Championship on 1300 and League 1 teams on 1000. Non-league teams are given a 750 rating for Challenge Cup purposes.

Here’s how each team sits going in to the 2020 season: 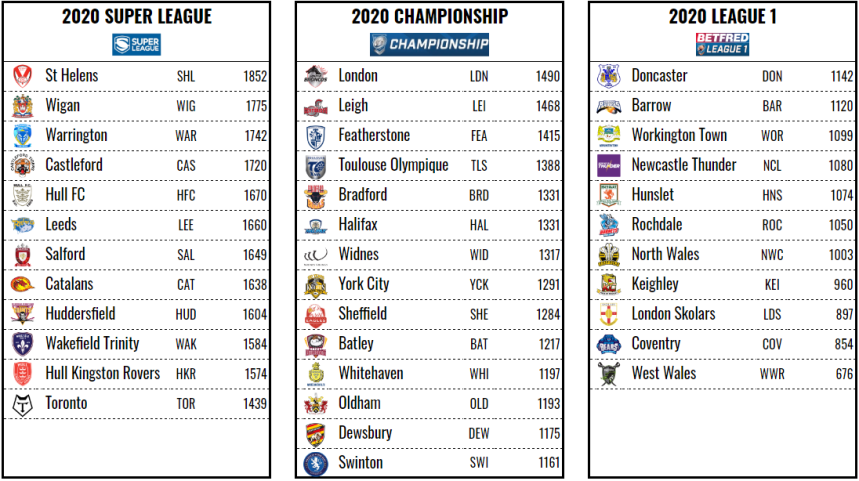 If you want to see how your team’s history looks, you can jump ahead: