I had meant to do some wrap-up posts after I got back from my honeymoon but it felt like the moment had passed, being two or three weeks after the grand final, and I didn’t have much to say other than the navel gazing stuff that people really don’t care about it.

This tweet sums up the 2018 season on the blog pretty well though:

(The dopamine is what gets me through the work day)

This post is about some of the stuff that’s changed and what’s a work in progress but mostly to let you know that we are indeed in business in 2019.

Purveyors of international rugby league merchandise, Mascord Brownz, run an affiliates program. What that means is that I get a link to send you to their website. If you click it and buy something, then I, and the national federation whose gear you buy, get a cut of the proceeds. It’s good for them and their mission to raise the profile of international rugby league, because they get some free advertising, and it’s good for me because I might actually a see some money out of this, which is something I never expected.

What this means is that the MB banner will be appearing on posts, in the sidebar (the sidebar actually appears below posts if you’re on mobile) and on the front page. It won’t be annoying. Please don’t ad block it or I will be very sad.

If you’d like to show your support for the Philippines, Spain, Albania, Jamaica, PNG, Tonga, Ireland, Samoa or other rugby league nations and this site, click our affiliates link and buy something.

In 2018, the systems performed pretty well, passing the eye test for the most part and providing some useful insight along the way, e.g. the Knights were still crap in 2018.

Some notes on the changes (here’s they were originally set up and some of the changes made for 2018) made during the off-season:

This is your annual reminder that Elo ratings alone can’t beat betting markets. Prices are set by bookmakers with far more sophisticated algorithms. However, it can be useful for a sanity check on your own punts or if the puntertariat has gotten a bit too excited and moved prices too far.

Poseidon ratings are something new. It covers off something I’ve wanted to do for a while, which is to provide separate offensive and defensive ratings for teams. If you’ve paid attention to soccer analytics over the last little, you may have seen forecasts like this: 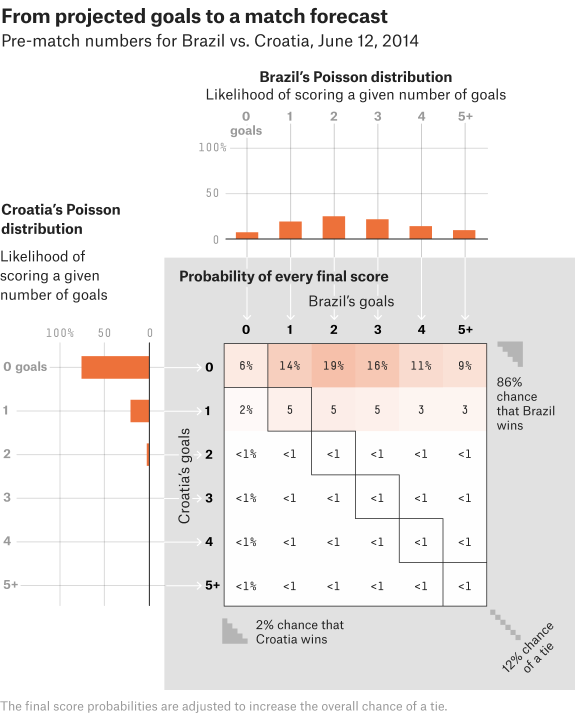 That’s the road we’re heading down. There will be a primer in the next week or so. You’ll want to be familiar with the Poisson distribution.

The previous player rating system, StatScore, has been thrown in the bin. Well, not quite but almost. I am replacing it with two new systems: PPG and WARG. The former is analogous to a batting average, that is a measurement of valuable work done over playing time, while the latter is an attempt at creating a wins above replacement-style system for rugby league and a measurement of total volume of valuable work done. I’m hoping to be able to use PPG to project a player’s performance forward, and to account for age and injury and to see if we can evaluate player salaries.

There are some complicated underlying concepts and there will be an incredibly long primer on that topic in the near future.

You may have noticed an Honours sidebar. This is to reflect the top teams in various categories last season:

There’ll be a page showing the full historical list going up at some point.

The tip posts are by far the most consistently popular type of post. Each week, a jury of Elo rating systems and I render a verdict on who the winner of each game is going to be. The theory was that the higher the level of agreement, the better the verdict would be, although I’d never actually tested that.

I’m changing that somewhat for 2019. For one, I’m excusing myself from the jury process. I’ll still give a tip, it just won’t be a jury vote. Instead, the two Elo rating systems, Poseidon and a vote based on player ratings of the lineups will be forming the jury for each game. Whereas previously, the jury’s win percentage was given as an average of the Elo systems’ win percentages (leading to odd situations where the favoured candidate had a below-50% chance of winning because one system really did not trust them), this year the percentage given will be the percentage of times that, when that particular voting arrangement has come up, how often the jury was correct. For example, if Eratosthenes is the sole dissenting vote from the tip that Archimedes, Poseidon and the player ratings agree on, that might be a situation where the tip in the past has been correct 70% of the time, so that’s what it will say.

I have a new side project in the works that I’m hoping to launch at the end of February. It has nothing to do with statistics but everything to do with rugby league (coincidentally, very much related to this recent Mascord column). I’m hoping for a positive reception (see above about making money). More details will come to light as it is ready to show.